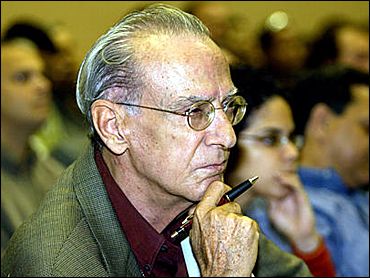 
Havana rallied support this weekend among overseas Cubans for its confrontation with the Bush administration's latest get-tough-on-Castro policy.

A three-day meeting in Havana drew nearly 500 Cubans living abroad. Two hundred-and-twenty of them came from the United States despite Washington's threat to prosecute or fine those who attended if they didn't first get a special license from Washington to attend the meeting.

As they converged on Havana, a bipartisan group of U.S. lawmakers introduced legislation on Capital Hill that would require an annual congressional review of the 40-year-old trade embargo. Its sponsors are all strong proponents of easing trade and travel restrictions on the communist island as a way to promote the growth of democracy there.

Also, a bipartisan group of top business leaders and former and current government officials sent an open letter to President Bush. It urges the administration to join the majority in Congress seeking to lift all restrictions on humanitarian trade and free travel to Cuba.

At the Havana meeting, the Cuban Government capitalized on popular sentiment in Miami and elsewhere against regulations going into effect June 1. These new restrictions prohibit Cuban-Americans from traveling to the island more than once every three years even in the event of a humanitarian emergency. They allow visits only if the traveler has immediate relatives still in Cuba. Visits to aunts, uncles and cousins are not permitted.

Jose Pertierra, a Cuban-American Washington lawyer attending the meeting, said, "He's [President Bush] playing fast and loose to divide families. The measures are so draconian that opposition is inevitable."

Cheering on last week's congressional move to challenge the current Cuba policy, Pertierra exclaimed, "The president has backed himself into a corner constructed by extremists in Miami without a thought to its consequences. Determining the regulations on travel to Cuba is the prerogative of Congress. The president is overstepping his authority."

Some participants, however, complained the event had been stacked. Prominent exile Eloy Gutierrez Menoyo said the closed-door meeting was heavily packed with people sympathetic to the communist government.

"The only people running the panels were officials with their own agenda: the U.S. embargo, the new U.S. restrictions, etc. Instead of opening the door more each time, they are polarizing the situation," he charged.

Menoyo, founder of the Miami-based group Cambio Cubano (Cuban Change),
announced at the end of a visit to Cuba last summer that he was staying and hoped to establish a legal opposition on the island. Although he has not been deported, the Cuban Government has done nothing so far to legalize his status.

He told us his efforts to raise issues of freedom of expression and political choice were rebuffed at the conference.

"There was a significant uproar after Menoyo spoke, people shouting 'Fidel, Fidel,'" said Cuban-American attorney Pedro Irigonegaray. "What ensued afterwards was one speech after another condemning the U.S."

Irigonegary said he felt compelled to take the floor to speak about "the justice that marks civilized society, freedom of speech and association, freedom of travel and freedom of political opposition." He says he was more politely received than Menoyo.

The Havana conference is the third of its type. The first was held in 1994, the second in 1995. The resulting dialogue has driven a wedge into the Cuban community, particularly in Miami, where an aging but still economically and politically powerful core of conservative exiles have been demanding the Bush administration take ever more stringent measures to oust Castro.

The Cuban government blames what it calls "the Miami mafia" and the U.S. trade embargo for the remaining restrictions on immigration. "It's the right of the Cuban government to maintain a defensive migration policy to protect against terrorism," declared Foreign Minister Felipe Perez Roque.

Many in Congress believe lifting the U.S. trade and travel bans would deny Castro an excuse for limiting freedoms on the island and force him to open up politically and economically.

Clearly concerned over the new measures tightening travel from the U.S. to the island and over efforts to discourage tourism from other countries also, the Cuban government encouraged those attending the conference to work to ease U.S. sanctions against it.

"The message was clear. The Cuban government's first priority is assuring the survival of the Revolution and we are being enlisted in that battle. No one should have any illusions about it," said one man as he walked out of the conference room where the meeting was taking place. The 63-year-old Cuban-American was in Havana on a family visit and, fearing repercussions at home, he asked his name not be used. Another Cuban-American participant with similar fears said he used his mother's maiden name to register at the hotel.

Although the event was dominated by discussion of the U.S. embargo, known in Cuba as the "blockade," participants also raised issues of practical concern and applauded Cuba's waiving of the entry visa requirements, effective June 1, making it easier for them to visit, although they will still need a valid Cuban passport. Various participants said they would like to see the passport life extended. They now expire every two years. If Cuban-Americans can only visit family once every three years, they will be forced to get a new passport every time, providing Cuba with a lucrative source of income.

Appreciated also was the announcement that the government would revamp airport custom regulations. Until now Cuban-Americans bringing gifts to the island have had their luggage meticulously searched and have been charged with arbitrarily-high import taxes. The new import tax will be based on luggage weight but no details of just how it would work and how much it would cost were given. Still there is so much resentment against the old procedures that any change was welcome.

Portia Siegelbaum has been the CBS News producer in Havana since February. She has covered the story of Cuba for more than 10 years. During that time, she worked on a number of documentaries on Cuba for Discovery and the BBC.
View CBS News In