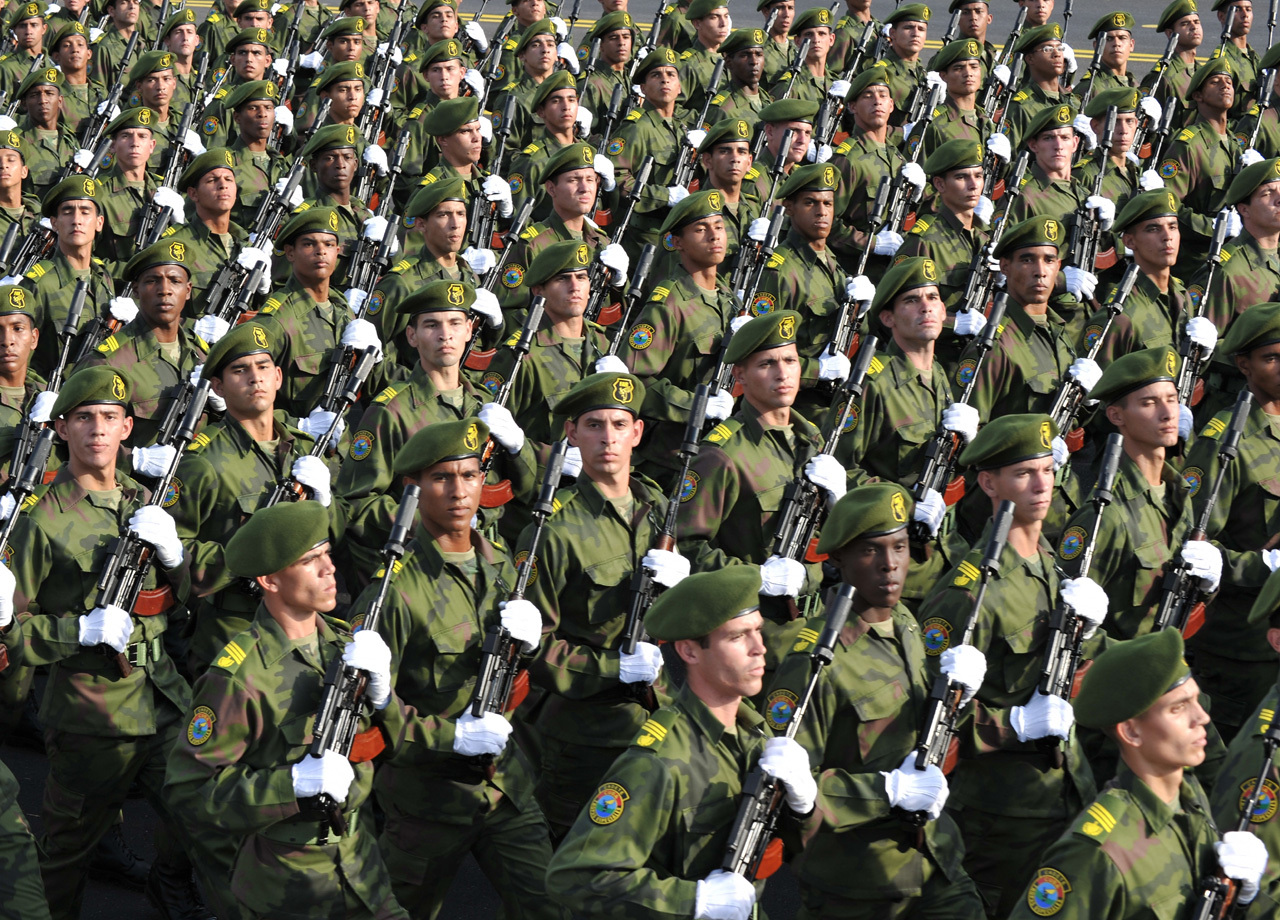 Havana - A military and civilian parade led by tens of thousands of young people paid homage to the historic leaders of Cuba's revolution on the 50th anniversary of one of their greatest triumphs: The defeat of a CIA-backed exile invasion at the Bay of Pigs, always referred to here as "imperialism's first defeat in the Americas."

It's also the lead-in to this afternoon's opening of a long-delayed Communist Party Congress intended to restructure the island's floundering economy with reforms long anathema to Cuba's communist stalwarts.

Former President and First Secretary of the Communist Party Fidel Castro is apparently watching the military review from home, but his brother and successor Raul Castro and other grey-haired government and Party leaders are on the reviewing stand in Havana's Revolution Square, waving to the troops and people as they parade past.

Raul Castro will be 80 in July, and Fidel Castro will mark his 85th birthday in August, after surviving a near-fatal illness in 2006 that forced him to relinquish his public positions.

Streets leading to the square were blocked by 5 a.m., as hundreds of thousands of workers, students, housewives and troops got into formation. Traffic on Havana's seafront drive, like other streets, was backed up for miles, as buses bringing in marchers from nearby provinces crept along bumper-to-bumper.

An hour-long display of military hardware, from MIG fighter planes and helicopters flying overhead to a variety of armored vehicles rolling past (either produced or adapted in Cuban factories) is being followed by an apparently endless parade of civilians waving flags and balloons.

The messages being sent by today's march: One, Cuba is prepared to defend itself against military aggression; and two, the revolution will outlive its historic leadership.

Speaking last December, President Raul Castro recognized the inevitable saying, "The sixth Congress of the Communist Party should be, as a fact of life, the last to be attended by most of us who belong to the revolution's historical generation. The time we have left is short, the task gigantic."

Since assuming the presidency officially in 2008, Raul Castro has gradually but consistently overturned nearly all of his older brother's economic and social policies. From closing boarding schools to turning over tens of thousands of hectares of fallow government land to private farmers; to implementing austerity measures that canceled generous government subsidies on even prime necessity items such as food; and opening a still-limited private sector, not as a grudging concession but an essential component of the new economic structure.

The eyes of all Cubans are on the four-day Congress beginning at 4 p.m. local time today. Some are watching with trepidation fearing the loss of the all-encompassing social security net that has cushioned them for more than five decades. Although a plan to lay off 500,000 workers by this month has been postponed, President Castro has made clear that the reduction of state payrolls is to continue.

Others are watching with the hope that the Congress will give them the opportunities they want to strike out on their own as private entrepreneurs without excessive government controls and taxes.

Nearly all Cubans are hoping that the Congress will drop long-time restrictions on the buying and selling of cars and homes, two of the most irritating prohibitions representing government meddling in people's lives.

However, President Castro has stressed time and again that the changes he is implementing are not meant to destroy socialism but strengthen it. The timing of the Congress is very deliberate - it begins 50 years to the day that Fidel Castro announced his revolution was to be socialist, and 50 years since he led the Cuban people at the Bay of Pigs to victory over the United States' first major effort to implement what would now be called "regime change" on the island.