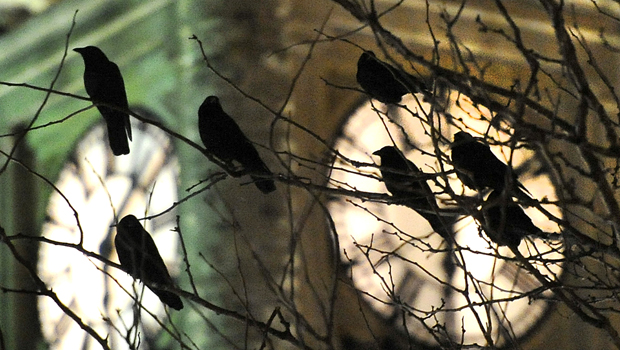 Thousands of crows roosting at night in a western Ohio city's downtown have some residents comparing the landscape with the Alfred Hitchcock movie "The Birds" as they work to drive them away.

The crows troubling Springfield aren't aggressive, as birds in Hitchcock's 1963 thriller were portrayed. But their overwhelming presence on trees and buildings causes concern over damage and potential health hazards from droppings, said Roger Sherrock, CEO of the Clark County Historical Society.

The society operates the Heritage Center of Clark County, one of the buildings favored by the federally protected crows.

"It can be unnerving to walk outside and see thousands of crows on trees, buildings and everywhere, especially if you're familiar with Hitchcock's movie," Sherrock said.

He estimates as many as 50,000 crows gather downtown after scavenging for food by day in fields surrounding the city of around 60,000, some 80 miles northeast of Cincinnati. State wildlife officials say there has been a roost in the area for decades, but Sherrock says crows began roosting downtown in huge numbers about three years ago.

No one is sure what draws the crows to downtown Springfield. Some experts say thermal heat from cities provides more warmth than rural areas in winter months when roosting occurs and loss of habitat to urbanization is probably a factor. The lack of predators in urban areas may also play a role, said Jim McCormac, an aviation education specialist with the state's Division of Wildlife.

"Crows are very smart and probably have learned they are safer in urban areas," he said.

Downtown businesses have spent thousands of dollars to remove bird droppings, which corrode surfaces and leave behind bacteria. Federal wildlife experts advised in 2012 to use electronically produced bird distress and predator sounds among other methods to drive away the birds.

"That seemed to help at first but not for long," Sherrock said.

They're also trying noise devices and laser pointers, among other deterrents.