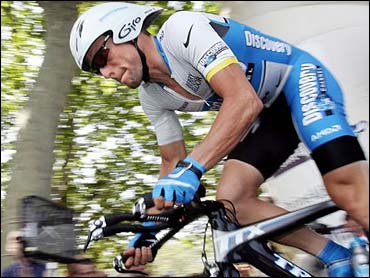 If Sheryl Crow wrote a song about Lance Armstrong, the title would be simple and to the point: "Make 'em suffer."

"His little boy (Luke) always says, `Make 'em suffer daddy,' so it definitely would incorporate that phrase," Crow said in an interview.

The 43-year-old rocker is on her second Tour de France, and is relishing seeing boyfriend Armstrong power his way to what could be his seventh straight win. Heading into Friday's 13th stage of the 23-day event, Armstrong held a commanding lead over his main rivals.

"It's one of the most inspiring events I've been involved in," said Crow, who is putting the finishing touches on her new album, "Wildflower." "When you see the spirit of these guys, it's crazy the lengths these riders go to. You know it's got to be painful, but their heart drives them to be great ... I love that seeking of greatness."

Crow feels privileged to be able to peel back the curtains of the 102-year-old race.

"I'm lucky, I'm one of the only women I know of in the history of the Tour that's got to spend time with the team," she said. "Breakfast with the team ... then I speak to people or go to the bus and spend time with Lance. In the evening, he goes to massage and I go to exercise with a run or on the bike ... and then we eat dinner with the team."

Despite rising early, spending hours on empty highways, smiling sweetly for countless fans and posing patiently for endless photos, Crow has found time to work on "Wildflower," which is due for release in September.

"I didn't bring my guitar, because I already have more stuff than all the riders," she joked. "I am working a lot during the day sequencing the record and picking mixes, videos. Now the busy work, it's not the creative fun stuff."

Crow said the title is intended as a reminder that "in chaos there is beauty everywhere and it's important not to miss that."

The Tour de France — which whirls clockwise around the country in a blur of bright colors, heaving crowds, monstrous mountains and eccentric people — is a form of chaos she prefers.

"Cycling is like rock festivals like Glastonbury," Crow said. "A lot of bands and a lot of fans. They may be into one band but they'll stay and get into other bands. It's similar in bike racing, you have all these teams showing up and all these invested fans who are into the spirit of the event. A very community feeling experience."

However, there is one drawback to being on the road with a professional cyclist.

"He's better about shaving his legs than I am," Crow said. "The pressure's on me to keep my legs smooth."