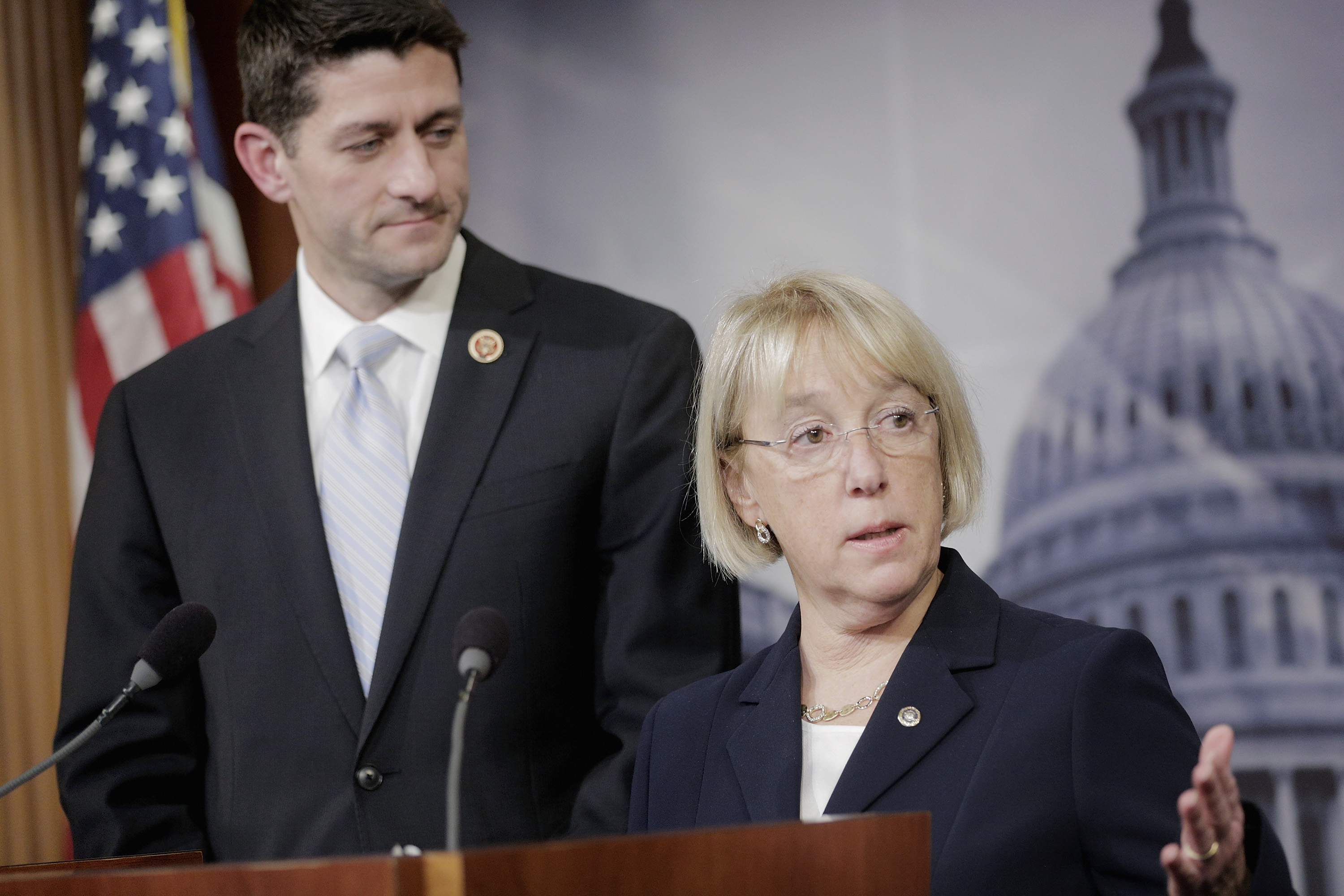 Sen. Patty Muray, D-Wash., and Rep. Paul Ryan, R-Wis., aren't getting many pats on the back for reaching a government budget deal from either Democrats and Republicans.

The Bipartisan Budget Act of 2013 sets discretionary spending for the current fiscal year at $1.012 trillion and would slash spending by $63 billion over the next two years, replacing across-the-board automatic spending cuts known as the sequester. Cuts would be split evenly between defense and non-defense programs and set discretionary spending at $520.5 billion and $491.8 billion, respectively. Spending will increase by $45 billion in 2014 and $18 billion in 2015. It also avoids another government shutdown.

called the deal a "vast improvement over the seemingly endless cycle of lurching from one crisis to the next." But Simpson and Bowles, who in 2010 headed a bipartisan panel that offered recommendations on how to cut the budget, noted that the deal will only have "a marginal impact" on the debt and fails to address key issues such as the growth of entitlement spending.

Lawrence Mishel, an economist with the liberal-leaning Economic Policy Institute, laments that the deal does not extend jobless benefits for the long-term unemployed. That emergency aid, initiated after unemployment shot up during the recession, is set to expire at the end of the year.

"This deal asks essentially nothing of the richest Americans while placing terrible burdens on the unemployed as well as new federal employees, and continuing the fiscal policy drag on our still-unfinished recovery," he said in a statement.

Though Ryan, the party's 2012 vice presidential nominee and who along with Murray leads Congress' budget-writing committees, is quoted as saying that the deal is a "step in the right direction," his ideological allies beg to differ.

David Stockman, who served as President Reagan's budget chief, called the deal a "joke and a betrayal," noting on CNBC that Murray and Ryan didn't just "kick the can" down the road, "they kicked it into low-earth orbit." He also urged Tea Party supporters "to go after after every incumbent Republican who votes for this abomination."

Writing on the website of the conservative Heritage Foundation, Romina Boccia argues that the budget agreement follows Congress' "old and destructive habit" of reducing spending in some areas while increasing it in others.  "The way Congress operates, it’s ridiculous for members to set spending caps," she a writes. "They just keep busting right through them."

Sen. Tom Coburn, R-Okla., a noted deficit hawk, said on MSNBC's "Morning Joe" that he was "real disappointed" with the agreement because it doesn't address wasteful spending, which is estimated by the Congressional Budget Office at $200 billion annually.Sen.  Rand Paul, R.-Ky., a Tea Party favorite and potential 2016 presidential candidate, fumed that the agreement increases spending and undoes "the minimal sequester cuts in current law, which weren’t even close to enough to begin with," his senior advisor Doug Stafford, told Politico. Another Republican, Sen. Mike Crapo of Idaho, told the political site that he "likely" will oppose the agreement as well.

Failure by Congress to pass the budget agreement would renew concerns of a possible standoff early next year over the debt ceiling, a cap on the amount of money that the government can borrow to fund its daily operations. Under an agreement thrashed out in October to end a 16-day partial government shutdown, Congress must increase the borrowing cap by Feb. 7, 2014.