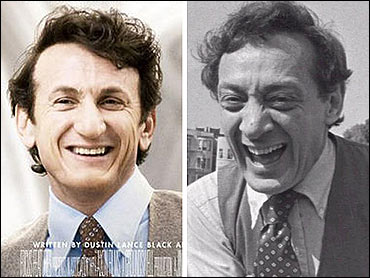 Chalk up another honor for Gus Van Sant's "Milk."

The biopic starring Sean Penn tied with "The Curious Case of Benjamin Button" for most nominations - eight - for the 14th Annual Critics' Choice Awards.

On Monday, the Producers Guild of America announced that "Milk" is getting the Stanley Kramer Award, which honors pictures taking on provocative social issues. Van Sant also got a tribute for "Milk" last week at the 18th annual Gotham Independent Film Awards. His "Milk" role earned Penn one of the acting nominations for the Independent Spirit Awards, given out in California the night before the Oscars.

The best picture nominees are:

Nominees for best actor are:

Nominated for the best actress award are:

The best supporting actor nominees are:

Nominated for best supporting actress are:

Vying for the best acting ensemble awards are the casts of:

The nominations for best animated feature went to:

The four nominees for best young actor and actress are:

Competing for the best comedy movie award are:

The nominations for best foreign language film went to:

The three nominees for best TV movie are:

Competing for the best action movie award are:

The choices for best documentary are:

Competing for the best composer award are:

The Critics" Choice Awards are given out annually by the Broadcast Film Critics Association (BFCA) which has more than 200 members in the United States and Canada, representing television, radio and online critics.
View CBS News In
CBS News App Open
Chrome Safari Continue
Be the first to know
Get browser notifications for breaking news, live events, and exclusive reporting.