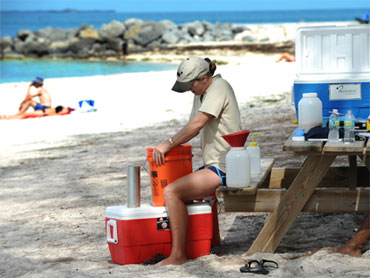 The oil spill continues to spread along the Gulf Coast and it's an anxious time in southern Florida. Just a week before the Memorial Day holiday, Florida Governor Charlie Crist has declared a state of emergency in the area.

So is it safe to go into the water? The Governor says the answer is yes, for now.

Appearing on CBS' The Early Show" this morning, Crist said that he was prompted to extend the state of emergency down the Florida coastline after the National Oceanic and Atmospheric Administration (NOAA) indicated some of the oil from the spill had entered the loop current.

"The loop current could bring it down to south Florida through the Florida Straits and then bring it around the southern coast up to the East Coast of Florida and the affected counties [for which] we declared a state of emergency," Crist said.

"I thought it was prudent and smart to stand up the emergency operation center, that they get the boom that they need in order to protect our beautiful beaches, and that's why I extended the declaration of emergency for south Florida."

"Last week when I was in the panhandle, some of the boat charter captains told me that their phones were not ringing, that they were experiencing a slowdown, if you will, as it related to their business.

"We're concerned about the tourism industry in Florida - 85 million people a year, after all, come to visit the beauty of the Sunshine State. We want them to continue to be able to do that. So far, so good. And we're going to be prepared and doing everything we can to protect our beautiful state."

Crist says it is unknown when or if oil may wash up on Florida beaches.

"We really don't know," he said. "Things look good for the Memorial Day weekend. I've been out on the beaches in the panhandle, I'll be out there again later today. I was in Miami just yesterday morning. The beaches are beautiful. The water is clean. The restaurants are open. The hoteliers are anxious for people to come down and the fish are biting.

"So it's a good time to come to Florida. Please come down Memorial Day weekend. Things look good so far. And we'll try to protect our beaches as much as we possibly can, and pray to God."

Yesterday BP chief operating office Doug Suttles said that the worst-case scenario for capping the leak could be when a relief well is completed in early August.

"That would be the worst-case scenario, no question about it," Crist said. "As always, we prepare for the worst, but we hope and pray for the best. We're used to handling emergencies in Florida because of all the hurricanes we've had, and I dare say we've got the best emergency management division on the planet. Very proud of the great work that they do, the preparation they've put into place."

The Florida National Guard has also been activated. "We have about 2,500 troops at the ready should we need them in order to help protect our beaches, or in the case that we face the worst case scenario - that we have to clean it up as quickly as possible," said Crist.