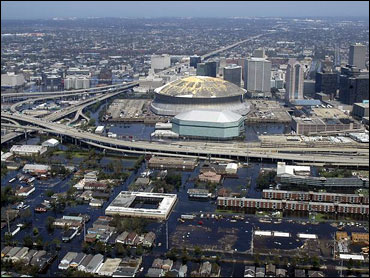 With thousands feared drowned in what could be America's deadliest natural disaster in a century, New Orleans was descending into lawlessness.

The slow exodus of people from the Superdome, which began Wednesday, was hampered Thursday amid reports that shots were fired at a military helicopter, an ambulance official overseeing the operation said. No immediate injuries were reported.

Looting spiraled so out of control that Mayor Ray Nagin ordered virtually the entire police force to abandon search-and-rescue efforts and focus on the brazen packs of thieves who have turned increasingly hostile.

An additional 10,000 National Guard troops from across the country were ordered into the hurricane-ravaged Gulf Coast to shore up security, rescue and relief operations in Katrina's wake. That brought the number of troops dedicated to the effort to more than 28,000, in what may be the biggest military response to a natural disaster in U.S. history.

"The truth is, a terrible tragedy like this brings out the best in most people, brings out the worst in some people," said Mississippi Gov. Haley Barbour. "We're trying to deal with looters as ruthlessly as we can get our hands on them."

Homeland Security Secretary Michael Chertoff told CBS News' The Early Show the looting in New Orleans "is outrageous" and pledged "there will be public order in the streets."

There was some relief from the increasingly violent looting, however. CBS News Correspondent John Roberts reports the state sent in armored vehicles bristling with heavily-armed troopers to control the streets. And the Pentagon has announced 10,000 more National Guard troops will be in New Orleans soon.

"We understand there are thousands of dead people," Sen. Mary Landrieu said Thursday morning at a news conference in Baton Rouge.

Nagin said there will be a "total evacuation of the city. We have to. The city will not be functional for two or three months." And he said people would not be allowed back into their homes for at least a month or two.

If the mayor's death-toll estimate holds true, it would make Katrina the worst natural disaster in the United States since at least the 1906 San Francisco earthquake and fire, and the nation's deadliest hurricane since 1900.

Chertoff said the government is "pouring tremendous resources" into the Katrina disaster zone but he conceded "ongoing flooding is hampering" efforts.

The federal government dispatched helicopters, warships and elite SEAL water-rescue teams in one of the biggest relief operations in U.S. history, aimed at plucking residents from rooftops in the last of the "golden 72 hours" rescuers say is crucial to saving lives.

As fires burned from broken natural-gas mains, the skies above the city buzzed with National Guard and Coast Guard helicopters frantically dropping baskets to roofs where victims had been stranded since the storm roared in with a 145-mph fury Monday. Atop one apartment building, two children held up a giant sign scrawled with the words: "Help us!"

Looters used garbage cans and inflatable mattresses to float away with food, blue jeans, tennis shoes, TV sets — even guns. Outside one pharmacy, thieves commandeered a forklift and used it to push up the storm shutters and break through the glass. The driver of a nursing-home bus surrendered the vehicle to thugs after being threatened.

Carjackings were becoming more common and anyone with a vehicle is in danger, reports CBS News Correspondent Cami McCormick.

Police said their first priority remained saving lives, and mostly just stood by and watched the looting. But Nagin later said the looting had gotten so bad that stopping the thieves became the top priority for the police department.

"They are starting to get closer to heavily populated areas — hotels, hospitals, and we're going to stop it right now," Nagin said.

Officials warn that dozens of patients in the flooded downtown hospitals are at now at risk of dying if they can't be evacuated. There were also reports of looters trying to force their way into the hospitals.

"There are patients that are not being dialyzed and they may die in the next day or two. They have not been dialyzed for four or five days, when they should be dialyzed three times a week," Ballester said.

Ballester and other hospital staffers fear they've been forgotten.

"We hear from the radio that we are already evacuated, and nobody has moved from here," he said.

Ballester's daughter says in e-mail that her father is an insulin-dependent diabetic himself, and without proper food or medication, in danger himself

At the highest and driest point in the beleaguered city, there's a new neighborhood with stories to tell: Interstate 10, reports CBS News Correspondent Lee Cowan. Hundreds of people wandered up and down the shattered highway — the only major freeway leading into New Orleans from the east — pushing shopping carts, laundry racks, anything they could find to carry their belongings.

"There's trouble on this bridge, for these people and all these little children and babies," evacuee Alfred Dorsey told Cowan. "You go down there and you see nobody but little people with babies. You're going to see old people who are sick, man. We need help up here."

Cowan also found a woman nine months pregnant and about to go into labor, and a body under a highway bridge.

"Look at this man down there," Cynthia Scott said. "This man jumped to his death, because he just couldn't take it anymore."

The floodwaters streamed into the city's streets from two levee breaks near Lake Pontchartrain a day after New Orleans thought it had escaped catastrophic damage from Katrina. The floodwaters covered 80 percent of the city, in some areas 20 feet deep, in a reddish-brown soup of sewage, gasoline and garbage.

Lt. Kevin Cowan of the state Office of Emergency Preparedness said it is too soon to say with any accuracy how many died. But he noted that since thousands of people had been rescued from roofs and attics, it could be assumed that there were lots of others who were not saved.

"You have a limited number of resources, for an unknown number of evacuees. It's already been several days. You've had reports there are casualties. You all can do the math," he said.