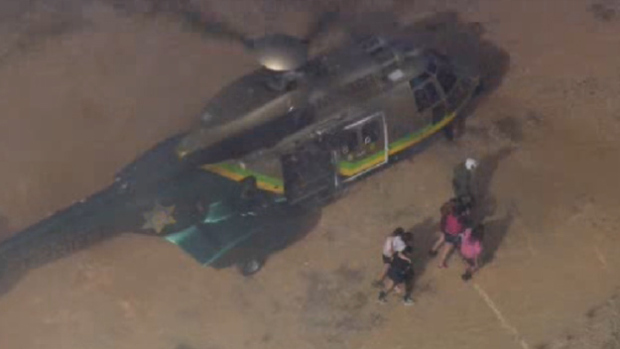 PASADENA, Calif. -- Fifteen hikers from a church group who failed to return from a weekend hike in the Southern California mountains were found safe by helicopter search crew Monday morning.

A medic was lowered to the group and no injuries were reported, Los Angeles County sheriff's Deputy Johnie Jones said.

Just before the midmorning announcement, family and friends of the hikers had gathered in a group hug.

Eleven adults and four juveniles, ages 14 to 36, set out in the Eaton Canyon Natural Area on Sunday morning and were expected back by the evening.

Someone on the trek called the local sheriff's station Sunday night and said the group was lost. Deputies arrived at Eaton Canyon around 10 p.m. and found two relatives of hikers who reported receiving texts from the hiking party that said "help."

The group, which included some who had done the same hike previously, was outfitted with backpacks, first-aid kits, extra clothing, food and water but did not expect to be in the wilderness all night, Jones said.

"They came with food, they came with water, they came with harnesses and everything. Unfortunately one of our members did get a minor injury and since it was becoming late what they decided to do was to stay the night," a hiker's sister, Anajancy Armenta, told CBS Los Angeles. "They prepared a shelter, and they did well."

Crews searched through the night and were joined by reinforcements at daybreak. Helicopters joined the search after early morning low clouds and fog began to break up.

Members of the Seventh Day Adventist church in Huntington Park said the hikers had gone out as a group on 3-mile treks before. They had planned to go rappelling at canyon waterfalls.

"We're assuming that they got tired and they stopped," Wendolyn Ortiz told KABC-TV.

Eaton Canyon is a very popular hiking spot with waterfalls at the base of the rugged San Gabriel Mountains, about 15 miles northeast of downtown Los Angeles. Rescues are common, however.