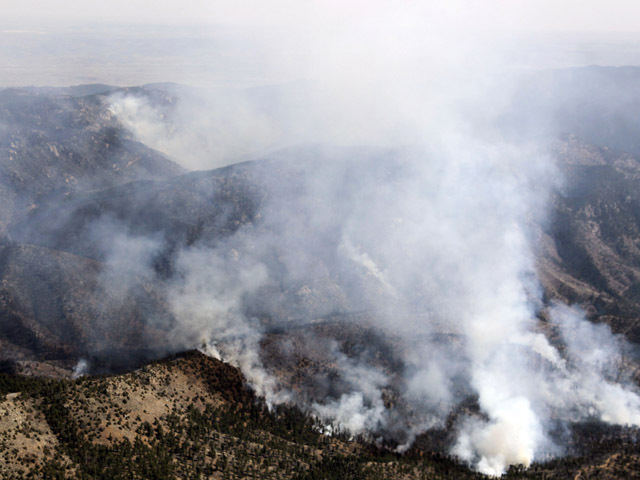 (AP) CONIFER, Colo. - Bolstered by reinforcements, fire crews were focusing Wednesday on building containment lines around the 7-square-mile wildfire that destroyed dozens of homes in the mountains southwest of Denver and may have claimed two lives.

About 400 firefighters from several states, including expert hotshot teams, were at the blaze and fire managers hoped to get help from air tankers for a second straight day. The fire, which broke out Monday, has quickly spread because strong winds. Until now, firefighters have been focused on protecting homes.

"We're going to try to take a bite out of this fire," Jefferson County sheriff's office spokeswoman Jacki Kelley said.

As crews dig lines around the fire's perimeter, a search team is using dogs to look for a woman missing in the fire zone. Her home was among 28 destroyed or damaged in the blaze.

2 dead in Colorado wildfire area as homes burn
Colo. wildfire could be linked to controlled burn

Authorities believe it was likely sparked by a controlled burn set last week to clear vegetation in the hopes of preventing a wildfire.

The fire resulted in mandatory evacuations of 900 homes south of the commuter town of Conifer, about 25 miles southwest of downtown Denver. Residents of 6,500 more homes were warned Tuesday to be ready to leave since many homes are in winding canyons, and authorities wanted to give as much advance warning as possible.

Meanwhile, investigators are trying to determine whether the fire reignited from a controlled burn that was meant to reduce vegetation that could fuel a devastating blaze around homes and watersheds. The Colorado State Forest Service conducted a 35-acre burn in the region on Thursday — on land belonging to Denver's water authority — said forest service spokesman Ryan Lockwood.

Crews finished the effort Friday and patrolled the perimeter daily to ensure it was out, Lockwood said. It was during Monday's patrol that a state forest service crew spotted the wildfire — also on Denver Water property — and alerted authorities, Lockwood said.

It wasn't clear if the wildfire was inside the controlled burn zone.

The Jefferson County Sheriff's Office will determine the cause of the blaze, while the Colorado State Forest Service was conducting its own review, Lockwood said.

Stacy Chesney, a spokeswoman for Denver Water, said the agency was "trying to be proactive" to protect water supplies from soil runoff caused by deforestation.

The area has several watersheds that feed metropolitan Denver and is several miles from the location of a 2002 Fire, one of Colorado's worst, which destroyed 133 homes and 466 outbuildings over 215 square miles.

Protocols for controlled fires include monitoring them until they are determined to be cold — meaning nothing is at risk for reigniting, said Roberta D'Amico, spokeswoman for the National Interagency Fire Center in Boise, Idaho. Fire officials normally check weather, terrain and other factors to create a burn plan and alert municipal authorities, D'Amico said.

"They have immunity on the duties of managing a forest. It would have to be determined they were negligent or acting outside their duties" for property owners to seek compensation, Walker said.

Officials found the bodies of a couple at a destroyed home, said Daniel Hatlestad of the Jefferson County Incident Management Team. They were identified as Sam Lamar Lucas, 77, and Linda M. Lucas, 76. A cause of death was pending for both.

On Tuesday, evacuees formed a long line to see a list of damaged properties posted by the Red Cross at Conifer High School. Residents groaned when Hatlestad told them it wasn't known when the fire would be contained.

"I understand that it's a difficult situation, but it's our house, and we're in the target zone," John Ryan, 47, said.

Hatlestad said the fire burned so hot that it melted farm and construction machinery, creating a silver stream of molten metal and softening the soles of deputies' shoes.

The fire threat in much of Colorado has grown during an unusually dry and warm March. On March 18, a grass fire charred 37 square miles in eastern Colorado and injured three firefighters.

As the fire near Conifer burned, Jefferson County officials implemented fire restrictions prohibiting any use of fireworks; fires unless they are built in permanently constructed fire grates in a developed park, campground or picnic area; and smoking, except within enclosed vehicles or buildings, a developed recreation site, or an area barren of combustible material within 3 feet.

Across the West, most states face normal wildfire danger, according to the National Interagency Fire Center in Boise, Idaho. However, the potential for summer fires is significantly "above normal" for New Mexico, Arizona, Utah, Nevada and California, center meteorologist Ed Delgado said.

"It's just a changing weather pattern. We're exiting La Nina, and becoming more neutral in that pattern," he said. "Historically when we've entered this weather pattern, we've had situations that would be conducive to those areas having a higher fire threat."

La Nina is a cooling of the surface water in the Pacific Ocean that disrupts weather patterns.

The fire near Conifer has consumed grass, brush and some Ponderosa Pine tree canopies.