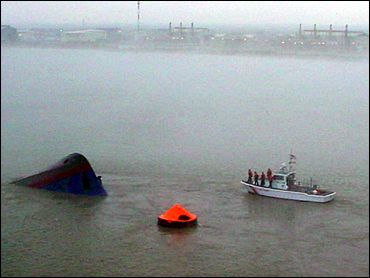 Rescuers held out faint hope of finding survivors among five sailors whose boat sank in fog over the weekend in a collision with a container vessel that paralyzed traffic in the Mississippi River.

Meanwhile, traffic on the river is stopped, because of the search and the partially-submerged supply boat Lee III, reports Dave Cohen of CBS radio affiliate WWL-AM.

Commercial divers were searching again Monday for the crew members.

"The Coast Guard continues to search for survivors for as long as possible and finding people alive is the first and foremost priority," said Petty Officer Jonathan McCool, a Coast Guard spokesman.

He said the sunken vessel's owner, Texas-based Ocean Runner Inc., had hired the salvage crew and divers in the search. Four Texans were among the supply boat's crew.

Dozens of large ships and four cruise ships were trying to get to or away from New Orleans as Mardi Gras fever builds up to a climax have been stranded while authorities mount a rescue mission.

Three of the cruise ships have docked in Alabama and Mississippi.

"We just got off the Conquest Nightmare," said a woman passenger from Carnival's Conquest. "We've basically been sitting on a boat over in Gulfport, Miss."

Carnival's Holiday docked in Mobile Monday, and its 1500 passengers were transferred to buses for a two-hour ride to New Orleans. The buses will then pick up passengers for the outbound cruise.

"It couldn't have happened on a worse weekend," said LaGrange.

The 178-foot Lee III sank on a foggy Saturday morning in the Southwest Pass, the only channel up the Mississippi River deep enough for large oceangoing vessels. The ship lay about 80 miles southeast of New Orleans, near where the river empties into the Gulf of Mexico.

There was no way to tell when the river may reopen, said McCool.

"Probably later than sooner," he said. "It's going to be a complicated evolution. And it's going to hold things up for a while."

About 40 ships too big for alternate routes were waiting to enter Southwest Pass, and about the same number were waiting to leave port, said Lt. Rob Wyman, a Coast Guard spokesman.

Royal Caribbean's Grandeur of the Seas and its 2,600 passengers were stranded in New Orleans. Some passengers booked for the week-long Caribbean cruise didn't mind being in town for more parades, but others were looking to get away from the revelry.

"I just wanted to kick back and clear my head," said Tom Faraci of New London, Conn., a nuclear power plant engineer whose mother and brother died in the last nine months.

The past few days have been a nightmare for river officials.

Saturday's collision came just a day after the river had been reopened following a collision Thursday between a freighter and an oil tanker in which 22,000 gallons of oil were spilled.

The missing crew members of the Lee III were: Lawrence Glass, 65, of Mobile, Ala., and four Texas men: Joseph Brown, 44, of Vidor, Daniel Lopez, 31, of Port Arthur, Ramon Norwood, 27, of Galveston, and Baldemar Villerreal, 54, of Lake Jackson.

The supply boat, which delivered people and supplies to offshore oil rigs, collided with the 534-foot Zim Mexico III, which reported damage but no injuries.