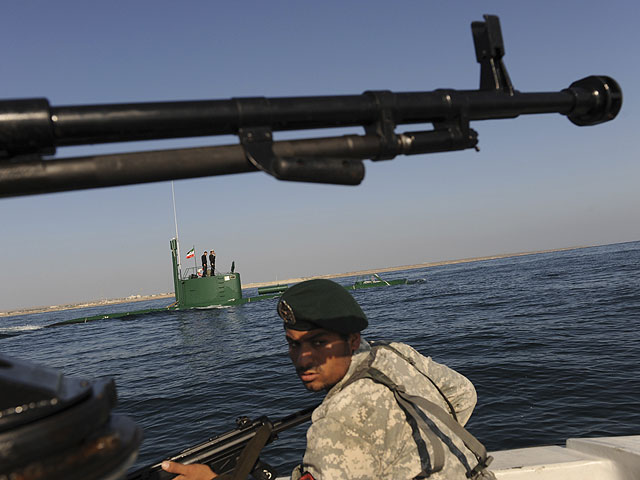 BERLIN -- The operator of cargo vessel boarded by Iranian forces as it was traversing the Strait of Hormuz said Wednesday it has confirmed the crew is safe. Iran meanwhile downplayed the political significance of the seizure, saying it was taken because the company that chartered it owed a local firm money.

The Marshall Islands-flagged MV Maersk Tigris was taken Wednesday to Bandar Abbas, the main port for Iran's navy, under escort by Iranian patrol boats, according to Maersk Line, the Danish shipping company that had chartered it.

The incident comes at a critical time in Iran's relations with the United States and the West, as talks about its contested nuclear program continue and frictions rise as U.S.-ally Saudi Arabia leads an airstrike campaign against Iranian-backed rebels in Yemen.

Speaking in New York, Iranian Foreign Minister Mohammad Javad Zarif said the ship's seizure had "nothing to do with Yemen" and was strictly a legal case.

"I think we should not read too much into it," Zarif said. The Iranian Port and Maritime Organization also released a statement saying that Maersk Line owed an Iranian oil company financial damages from an Iranian court ruling.

"We have, however, not received any written notification or similar pertaining to the claim or the seizure of the vessel," Storgaard said. "''We are therefore not able to confirm whether or not this is the actual reason behind the seizure."

CBS News national security correspondent David Martin reported that Tuesday's boarding of the Maersk Tigris is part of a pattern and the assumption is that it is in retaliation for having lost face last week when the Iranian convoy to Yemen turned around and headed home.

The Strait of Hormuz is vital to the international oil trade, and Iran has wielded its geographic location along the waterway's northern border as a bargaining chip in recent years, even threatening to close it to all international shipping traffic in 2012.

Earlier this year, Iran's military conducted drills near the Strait in the Persian Gulf in a show of force just off its borders.

Cor Radings, a spokesman for the ship's operator, Rickmers Ship Management in Singapore, which is part of a Hamburg-based shipping group, said his company had no known issues itself with Iran and that only Maersk Line could comment on the Iranian claim.

Radings said his company had been in touch by phone with the crew during the day on Wednesday.

"We have had the confirmation that they are in relatively good condition and safe on board the ship," he said.

Iranian forces remain on board the ship, Radings said, adding that Rickmers had not been in contact with Iranian authorities.

Iranian forces boarded the MV Maersk Tigris on Tuesday after firing warning shots across the bridge, prompting the U.S. Navy to dispatch a destroyer and a plane to the area in response.

Radings identified the ship's 24 crew members as "mainly from Eastern Europe and Asia." Iranian state television on Tuesday said the crew members were from Britain, Bulgaria, Romania and Myanmar. Romania's Foreign Ministry confirmed four of the sailors were its citizens, declining to elaborate due to privacy laws.

Maersk chartered the container ship from Rickmers and was hauling commercial goods and had no "special cargo" such as military equipment, said Radings, speaking by phone from Spain.

U.S. firm Oaktree Capital, a global investment company based in Los Angeles, declined to comment when asked about a shipping industry magazine's report that it owned the MV Maersk Tigris and referred any questions to Radings. Radings would only say the ship was owned by "private investors" and would not elaborate.

The U.S., other world powers and Iran are trying to hammer out a final deal over Iran's nuclear program. Last week, the U.S. Navy dispatched an aircraft carrier and guided missile cruiser to the Arabian Sea amid worries that a convoy of Iranian cargo ships was headed to Yemen to deliver arms to the Shiite rebels fighting to take over Yemen.

In Tuesday's incident, the intercepted ship was traveling through the narrow Strait, which is technically Iranian and Omani territorial waters, but under international agreement is open to foreign ships making an innocent passage, according to the Pentagon.

The Strait of Hormuz is the route for about a fifth of the world's oil and is only about 21 miles wide at its narrowest point. Ships traversing the chokepoint have even less room to maneuver. The shipping lane in either direction is only 2 miles wide, with a 2-mile buffer zone between them.

U.S. Navy officials said Tuesday that several Iranian Revolutionary Guard Navy vessels had surrounded a U.S.-flagged cargo ship, the Maersk Kensington, last Friday as it was transiting the Strait of Hormuz. No shots were fired, the Iranian vessels broke off contact, allowing the cargo ship proceeded without further incident, they said.