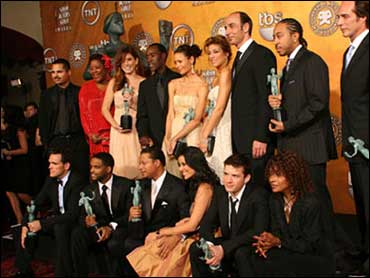 The ensemble drama "Crash" pulled off one of the biggest upsets in Academy Awards history, winning best picture Sunday over the cowboy romance "Brokeback Mountain," which had been the front-runner.

"Crash," featuring a huge cast in crisscrossing story lines over a chaotic 36-hour period in Los Angeles, rode a late surge of praise that lifted it past "Brokeback Mountain," a film that had won most other key Hollywood honors.

"We are humbled by the other nominees in this category. You have made this year one of the most breathtaking and stunning maverick years in American cinema," said "Crash" producer Cathy Schulman.

Lead-acting prizes went to Philip Seymour Hoffman as author Truman Capote in "Capote" and Reese Witherspoon as country singer June Carter in "Walk the Line," while corporate thrillers earned supporting-performer Oscars for George Clooney in "Syriana" and Rachel Weisz in "The Constant Gardener."

More than half the actors nominated for the awards-fest had never been up for an Oscar before. All four acting winners were first-time nominees, and all were expected to win, People Magazine Senior Editor Jess Cagle reports on The Early Show.

"Brokeback Mountain" filmmaker Ang Lee won best director for the tale of two old sheepherding pals who carry on a love affair they conceal from their families.

"I wish I knew how to quit you," Lee told the audience crowd, reiterating the film's most-quoted line.

"I'm so proud of the movie," Lee said backstage, where he was asked if he was disappointed that his film about gay cowboys lost best picture and what might have kept it from winning. "Why they didn't go for it, I don't know. You're asking a question that I don't know the answer. ... Congratulations to the 'Crash' filmmakers."

Witherspoon won a close race over Felicity Huffman in a gender-bending performance as a transsexual in "Transamerica."

"Oh, my goodness. I never thought I'd be here in my whole life growing up in Tennessee," said Witherspoon, who, like co-star Joaquin Phoenix as Carter's soul mate, country legend Johnny Cash, handled her own singing in "Walk the Line."

"People used to ask June how she was doing, and she would say I'm just trying to matter. I know what she means," said Witherspoon, who told the audience the Oscar made her feel she was doing work that matters.

Ryan Phillipe, Witherspoon's husband remarked to Smith, "What an amazing night, to see my wife up there, that last 30 minutes was just mind-blowing, man. To see her holding the Oscar after being together 10 years, and then for ("Crash") to win, it just blew me away."

Hoffman's performance nimbly straddles the magnetic qualities of raconteur Capote and the effete, off-putting egoism of the gay author.

"Wow, I'm in a category with some great, great, great actors, fantastic actors, and I'm overwhelmed. Really overwhelmed," said Hoffman, who asked the Oscar audience to congratulate his mother for bringing up four children alone.

Clooney's win capped a remarkable year, during which he made Oscar history by becoming the first person nominated for acting in one movie and directing another.

Along with performing in "Syriana," Clooney directed the Edward R. Murrow tale "Good Night, and Good Luck," which earned him directing and writing nominations and was among the best-picture contenders.

In "Syriana," Clooney effaced his glamour-boy looks behind the bearded, heavyset facade of a CIA patriot who grows jaded over U.S. oil policy in the Middle East.

"All right, so I'm not winning director," the first-time winner joked, adding that an Oscar always would be synonymous with his name from then on, including in his obituary. "Oscar winner George Clooney, sexiest man alive 1997, 'Batman,' died today in a freak accident."

"This group of people gave Hattie McDaniel an Oscar in 1939 when blacks were still sitting in the back of theaters," Clooney said, referring to the supporting-actress winner from "Gone With the Wind," the first black performer to receive an Oscar.

It makes for a fun year," Clooney tells The Early Show co-anchor Harry Smith. "It makes it fun because you spend a lot of time trying to get things done that you want, that you believe in, but they're hard to get done, and it's tricky, and usually you don't get the toys to play with, you know what I mean?...I feel like I caught a break."

In "The Constant Gardener," adapted from John le Carre's novel, Weisz played a humanitarian-aid worker whose fearless efforts against questionable pharmaceutical practices makes her a target for government and corporate interests in Africa.

Weisz told Smith she's seven-months pregant, and she could feel the baby moving around: "There was quite a bit of adrenaline for the baby tonight. Someone told me babies bring blessings, so maybe the baby brought this (Oscar)."

"Brokeback Mountain," which led contenders with eight nominations, lost in three acting categories (Heath Ledger, Michelle Williams and Jake Gyllenhaal) but picked up the Oscar for adapted screenplay by Larry McMurtry ("Lonesome Dove") and Diana Ossana and for Gustavo Santaolalla's musical score as well as for Lee as director.

The Oscar for original screenplay went to the ensemble drama "Crash," written by the film's director, Paul Haggis, and Bobby Moresco.

The raucous hip-hop tune "It's Hard Out Here for a Pimp" from "Hustle & Flow," whose expletive-laden lyrics had to be toned down for performance at the Oscars, won the prize for best song. The song was written by the rap group Three 6 Mafia, aka Jordan Houston, Cedric Coleman and Paul Beauregard.

Featuring dancers dressed as hookers and pimps gyrating on stage, the song's performance stood in sharp contrast to the other nominated tunes and the general stateliness of the Oscars.

"You know what? I think it just got a little easier out here for a pimp," joked Oscar host Jon Stewart.

The family tale "Wallace & Gromit: The Curse of the Were-Rabbit" won the Oscar for best animated feature film.

Co-director Nick Park, who also made the hit stop-motion film "Chicken Run," thanked voice stars Helena Bonham Carter and Peter Sallis, who has done the voice of cheese-loving Brit Wallace for 23 years, since the filmmaker came up with the character in his student days.

"You've been an absolute gem, Peter, and you've sparkled all the way," Park said.

The Antarctic nature tale "March of the Penguins," a surprise smash at the box office, was honored as best documentary.

"King Kong," from "Lord of the Rings" creator Peter Jackson, won three Oscars, for visual effects, sound mixing and sound editing. The Japan drama "Memoirs of a Geisha" also earned three, for cinematography, costume design and art direction, while the fantasy epic "The Chronicles of Narnia: The Lion, the Witch and the Wardrobe" was picked for best makeup.

Clooney was one of the marquee names among a lineup of acting nominees heavy on lesser-known performers. Oscar organizers hoped new host Stewart and the cultural buzz over front-runner "Brokeback Mountain" would beef up viewership.

"Brokeback Mountain" is the most successful of the nominated films for best picture, taking in $75 million at the box office. But that ranks just 29th among all the films released last year. And "Capote," which has earned the least, ranks 104.

Stewart used best-picture nominee "Capote" to set up a "Brokeback Mountain" wisecrack, saying the film "showed America not all gay people are virile cowboys. Some are actually effete New York intellectuals. It's true."