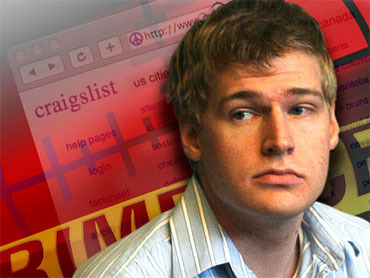 BOSTON (CBS/AP) Suspected "Craigslist Killer" Philip Markoff's last thoughts, as he lay dying in his jail cell from self-inflicted wounds, were apparently of the life he threw away and the woman he alienated with his sick and brutal alleged acts - as evidenced by her name scrawled in blood on the wall of his prison cell.

The Suffolk County district attorney's office announced Markoff's apparent suicide Sunday but did not say how he died.

In a chilling twist to an already ghoulish case, law enforcement officials said that Markoff scrawled "Megan" in his own blood just before he died, according to The Boston Globe.

Megan is the name of his ex-fiancee, Megan McAllister.

The same officials, speaking on the condition of anonymity, said that Markoff, who was suspected of targeting women on Craigslist, robbing them and killing one woman, severed his carotid artery before placing a plastic bag over his head, the newspaper reported.

The family members of one victim, slain masseuse Julissa Brisman, were angry and disappointed when they heard of the suicide because they felt markoff had victimized them all over again, according to the attorney for Brisman's mother, Carmen Guzman.

"First he took their daughter from them, then he denied that opportunity [to confront Markoff at trial]," said the lawyer, Djuna Perkins. "The criminal trial allows them to confront the suspect, hear the evidence and reach some resolution in the case."

Just days after his arrest in April 2009 Markoff was placed on suicide watch after deputies noticed marks on his neck. But Suffolk County Sheriff Andrea J. Cabral says there had been no recent indications that Markoff was suicidal, the Globe reported.

"As far as I know right now, there were no disciplinary problems, no acting out," Cabral said in a phone interview with the paper.

Sources also told the Globe that Markoff had not been checked on all night the night he succeeded in choosing his own ending to the baffling case of the medical student turned suspected murderer.

MORE ON 48 HOURS
The Craigslist Killer: Seven Days of Rage