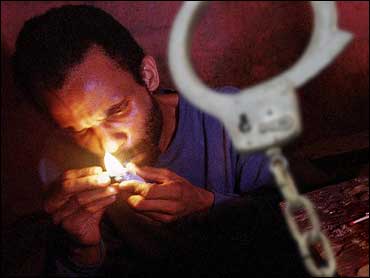 The business cards got a response, but surely not what their owner had in mind when he had them printed up.

They came to the attention of Leavenworth police, who used them to make a drug arrest last week.

Sylvester J. Williams, 21, of Leavenworth, was charged Monday with possessing crack cocaine with the intent to sell it, Maj. Patrick Kitchens of the Leavenworth Police Department said.

He said police had heard for some time that Williams had been selling drugs in the area. "Then we heard that he was handing out business cards," the officer said. "In the course of our investigation we were fortunate to come up with one, and we gave him a call."

Kitchens said the business card had an image of what appeared to be an alarm clock being hit by a boxing glove and said: "For a quick hit on time call the boss."

"When he answered, we agreed to buy some crack from him, we went up there, and we arrested him," Kitchens said.

The arrest was made Friday.

"It makes our job considerably easier when they advertise and let us know where to get ahold of them," Kitchens said.