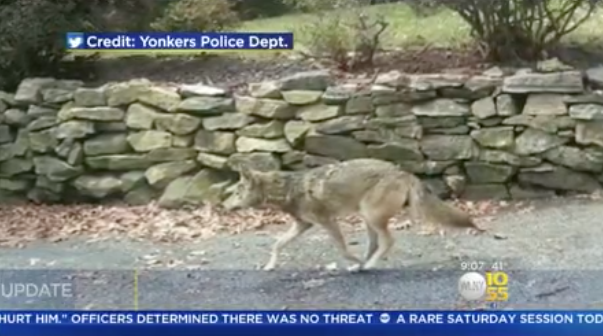 YONKERS, N.Y. — A coyote that was shot and killed by police following several attacks in Westchester County, north of New York City, has tested positive for rabies. At least eight people were bitten since Wednesday, along with a dog and some sheep, CBS New York reports.

"The coyote did bite a Westchester County police officer and at that time, the animal was shot and is deceased," said police spokesman Kieran O'Leary.

"When my son came in last night, I mean he was shaking. ... You figure it's nighttime, you know whatever – not thinking much of it," resident Donna Nolan told CBS New York. The next morning, an ambulance rushed to the neighborhood after a coyote attacked a mail carrier, biting her leg.

Public parks were closed in neighboring Hastings-on-Hudson while officials searched for the coyote that bit three residents and killed a Yorkshire terrier last Wednesday.

"Coyotes have been here for at least 10 years without incident. So this is clearly a profoundly disturbing development," said Hastings-on-Hudson Town Manager Peter Swiderski.

Yonkers police say a second coyote suspected in the attacks is still at large.

They warn residents to be alert and report any contact with the animals.