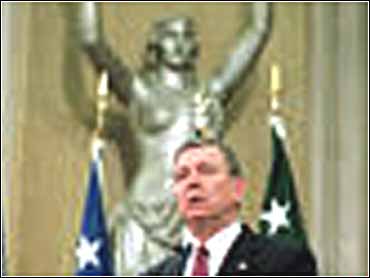 No longer will the attorney general be photographed in front of two partially nude statues in the Great Hall of the Department of Justice.

The department spent $8,000 on blue drapes that hide the two giant, aluminum art deco statues. For aesthetic reasons the drapes were occasionally hung in front of the statues before formal events. The department used to rent the drapes, but has now purchased them and left them hanging.

Justice Department spokeswoman Barbara Comstock said the decision to install the curtains was made by Attorney General John Ashcroft's aide who handles advance work. "It was done for TV aesthetics," she said.

ABC News reported that Ashcroft ordered the statues covered because he didn't like being photographed in front of them.

Since the terrorist attacks of Sept. 11, Ashcroft has been photographed several times in front of the female statue that represents the Spirit of Justice. The statue has its arms raised and a toga draped over its body, but a single breast is completely exposed.

The other statue, of a man with a cloth covering his midsection, is called the Majesty of Law.

Both statues were installed in the 1930s when the building was finished, according to the Justice Department.

The statues were hidden by curtains on Nov. 20, when President Bush came to the Justice Department to name the building after the assassinated former attorney general,
Robert Kennedy.

Comstock said the Justice Department bought the drapes to avoid having to rent them every time the agency had a formal event. The drapes cost about $2,000 to rent.

She also said Ashcroft was not involved in the decision.

"He did not know this was being done," Comstock said. "The attorney general has more important things to do than worry about what appears in pictures."

The Great Hall is an ornate, two-story room that the department uses for ceremonies and special speeches.

In the past, snagging a photo of the attorney general in front of the statues has been something of a sport for photographers.

When former Attorney General Edwin Meese released a report on pornography in the 1980s, photographers dived to the floor to capture the image of him raising the report in the air, with the partially nude female statue behind him.

Monday, a day with no public events in the Great Hall, the curtains, with the Justice Department emblem in the center, were placed across the stage, concealing the statues.

A former Justice Department official e-mailed a copy of an article about the statues to colleagues, adding the caption, "homeland security?"

White House press secretary Ari Fleischer joked about the controversy to reporters Tuesday. "If anybody has any nude statues, bring them to my office; I'll review them," he said.

Senate nears passage of climate and health bill in marathon session
Thanks for reading CBS NEWS.
Create your free account or log in
for more features.
View CBS News In
CBS News App Open
Chrome Safari Continue
Be the first to know
Get browser notifications for breaking news, live events, and exclusive reporting.