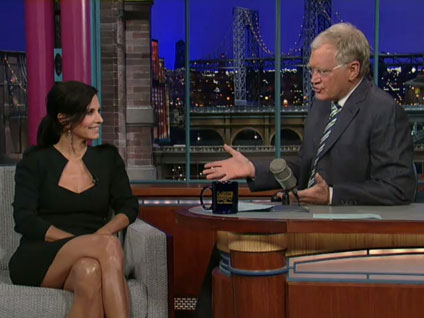 (CBS) Courteney Cox and estranged husband David Arquette are getting along fine, the actress says, but she still turned him down when he wanted to get romantic during a trip to Disney World.

"He did try to hit on me, yeah," she told David Letterman on the "Late Show" Wednesday night. "He hit pretty hard, and I said, 'You know, you don't have the Fast Pass right now. Not to that ride!'"

"Does Disney World have a policy?" Letterman asked her.

"Yes. They put us in separate rooms," she joked.

The two were at the Happiest Place on Earth on a trip with their daughter, Coco.

And while the pair are still separated, she said their relationship is now "kind of the best we've ever been," because they have been honest with each other.

And what about their future? "I don't know what's going to happen. I really don't," she told Letterman. "I'm sure this decision needs to be made at some point, but we're getting along so well that I hate to rock the boat. I really do."