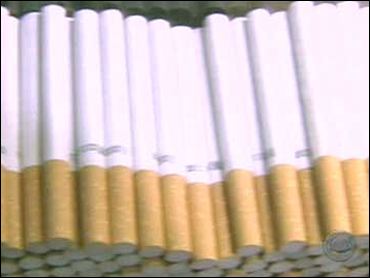 A Florida appeals court on Wednesday threw out a record-setting $145 billion verdict for thousands of Florida smokers against the tobacco industry, saying the case should not have been tried as a class-action lawsuit.

The 3rd District Court of Appeals said the smokers could not group themselves together in a single lawsuit against the nation's five biggest cigarette makers because they didn't share enough common interests to sue as a group.

By eliminating class-action status, the three-judge appellate panel discarded the award a Miami-Dade County jury had given sick Florida smokers in 2000 following a two-year trial.

"There will almost certainly be another appeal to the Florida Supreme Court which is far more likely to re-certify the class than it is to reinstate the multi-billion-dollar verdict. So this legal story is not over, not by a longshot," says CBS News Legal Analyst Andrew Cohen. — "This doesn't necessarily mean that these tobacco companies are entirely out of the woods.

"The Florida Supreme Court could, in turn, overrule this lower appeals court or these plaintiffs now could pursue their claims individually."

The jury had decided that cigarettes are deadly, addictive and defective because they make people sick when used as directed. It set punitive damages for an estimated 300,000 to 700,000 smokers after deciding compensatory damages for three people with cancer who served as representatives of the group.

In addition to eliminating class-action status, the appeals court Wednesday agreed with the tobacco industry that the award would have violated state law by bankrupting the companies and called the trial plan unconstitutional.

"The fate of an entire industry, and of close to a million Florida residents, cannot rest upon such a fundamentally unfair proceeding," the panel wrote. "Our system of justice requires more."

Attorneys Stanley and Susan Rosenblatt, who represented the smokers, were out of town Wednesday and could not be reached for comment.

Margaret Amodeo, whose husband Frank was awarded $5.8 million in compensatory damages by the same jury for his throat cancer, said the couple was "very disappointed." The decision discarded the individual awards as well.

"This decision clearly shows we were right when we said it was inappropriate for this case to be pursued as a class action," said Mark Smith, a spokesman for Brown & Williamson Tobacco Corp., whose cigarette brands include Kool and Lucky Strike.

"We feel that we've been completely vindicated in every respect," said Ronald Milstein, vice president and general counsel of Loews Corp.'s Lorillard Tobacco, maker of Kent and Newport cigarettes.

The other defendants were Altria Group's Philip Morris, R.J. Reynolds Tobacco and the Liggett Group.

The major tobacco companies had settled state lawsuits over smoking-related health care costs in 1998 for a total of $246 billion.

"Absent intervention by the Florida Supreme Court, this would appear to be a terrible blow to the class of sick smokers in Florida," said Mark Gottlieb, an attorney with the anti-smoking Tobacco Products Liability Project at Northeastern University law school.

He called the decision "very surprising" because the same court in 1996 had fashioned the class during a pre-trial appeal. At the time, the appeals court refused to allow a national class, limiting the class to Florida only. It later refused to reconsider its decision.

The court said Wednesday that individual lawsuits would be more efficient than the class action, which likely would involve years of mini-trials to decide compensatory damages for each smoker.

Since the case began, many other courts have denied class-action status for lawsuits filed by smokers.

The largest jury awards for individual smokers suing tobacco companies have been slashed by judges as well.

In October, a Los Angeles jury ruled that Philip Morris USA should pay $28 billion to a 45-year smoker with lung cancer. A judge later slashed the award to $28 million, saying it was "a reasonable sum."

The previous record for a verdict won by an individual against a tobacco company was $3 billion, awarded in June 2001. A California judge later reduced that verdict to $100 million.

Over time, public policy has been moving against Big Tobacco.

The World Health Organization is now pushing governments to adopt sweeping anti-smoking restrictions. Florida joined four other states that have banned smoking in most indoor workplaces and restaurants, and Arizona voters slapped smokers with a 60-cent-a-pack tax increase.