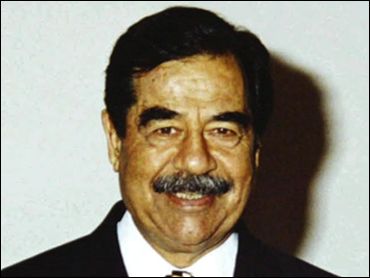 A federal judge Wednesday ordered Osama bin Laden, Saddam Hussein and others to pay early $104 million to the families of two Sept. 11 victims, saying there is evidence – though meager - that Iraq had a hand in the terrorist attacks.

The closely watched case was the first lawsuit against the terrorists believed responsible for the World Trade Center attack to reach the damages phase.

U.S. District Judge Harold Baer ordered that the damages be paid by bin Laden, al-Qaida, the Taliban, Saddam and the former Iraqi government. The judge ruled against them by default in January after they failed to respond to the lawsuits brought on behalf of two of the trade center dead.

James E. Beasley, a Philadelphia lawyer who brought the case, hopes to collect the money from frozen Iraqi, bin Laden and al-Qaida assets.

However, further court proceedings would be required before any payout could occur. And Beasley said it is unclear how much money would be available to satisfy the judgment. To help pay for Iraq's reconstruction, the Bush administration has started using roughly $1.7 billion Iraqi funds frozen in 1990.

Beasley called Baer's finding "a significant victory" because it represented the first time a judge linked al-Qaida and Iraq in the Sept. 11 terrorist attacks.

In his ruling, Baer concluded that lawyers for the two victims "have shown, albeit barely ... that Iraq provided material support to bin Laden and al-Qaida" and collaborated in or supported al-Qaida's Sept. 11 attacks.

Baer said lawyers relied heavily on "classically hearsay" evidence, including reports that a Sept. 11 hijacker met an Iraqi consul to Prague, Secretary of State Colin Powell's remarks to the United Nations about connections between Iraq and terrorism, and defectors' descriptions of the use of an Iraq camp to train terrorists.

James Kreindler, a lawyer representing the families of 500 people killed and 1,000 injured in the attacks, said a case his firm was preparing for trial will offer proof of ties between Iraq and al-Qaida.

"We have uncovered the financial connection between Iraq and al-Qaida," he said.

Baer heard evidence for two days in March to help him determine damages.

The cases were brought on behalf of George Eric Smith, 38, an analyst for SunGard Asset Management, and Timothy Soulas, 35, a senior managing director and partner at Cantor Fitzgerald Securities.

The cases relied in part on a 1996 law that permitted lawsuits against countries identified by the State Department as sponsors of terrorism.

Professor of International Law and CBS News Analyst Pamela Falk said, "There may be payments in this because of the Iraqi money, but it really puts the Bush administration in a position where they have to decide where the assets that are already in the United States, if they go to the victims, or go back to the Iraq people.

"This would be a way to make the terrorists pay," Falk said, "and so (the president) may very well come out and say there's a lot of money to go back to Iraq, but this should go to the (September 11th) victims first.

"It's a real dilemma for the Bush administration."