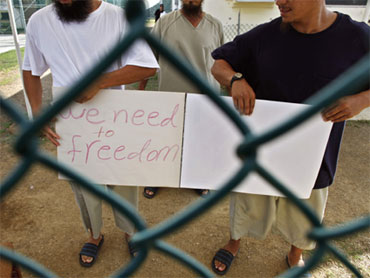 WASHINGTON - The five remaining Chinese Muslims who are being held at Guantanamo Bay lost their latest bid Monday to get the Supreme Court to hear their case.

The justices turned away a plea from the five detainees, who have been held at the U.S. naval base in Cuba for nearly nine years.

The detainees had previously declined an offer to be resettled in the tiny Pacific nation of Palau, where six other Chinese Muslims, or Uighurs, have gone to live. It is not clear why the five refused to go to Palau, or to a second, unidentified country that the Obama administration has said was willing to take them.

Justice Stephen Breyer, writing for three of his colleagues, said he agreed with the court's decision not to hear the case because of the two countries' offers and "the government's uncontested commitment to continue to work to resettle" the Uighurs. Justices Ruth Bader Ginsburg, Anthony Kennedy and Sonia Sotomayor joined Breyer's opinion.

Justice Elena Kagan, who worked on the case while serving in the Justice Department, did not take part in the court's action Monday.

The detainees wanted the court to consider the question of whether a judge can order detainees released into the United States.

Eleven other members of the Turkic Muslim ethnic group from China's west have left Guantanamo for Albania, Bermuda and Switzerland.

The U.S. has agreed for years that the Uighurs are not enemy combatants.

China wants the Uighurs sent home, but they argue — and the administration agrees — that they could be tortured if they are sent to China.

The U.S. has undertaken extensive diplomatic efforts, aggressively opposed by China, to find the Uighurs a home.