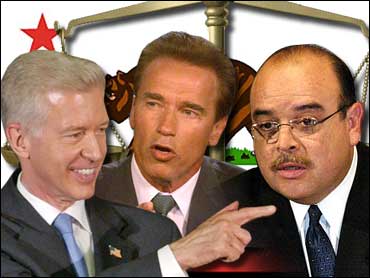 
You could clearly tell from the oral argument Monday that the 9th Circuit's 11-judge panel was looking for a way to get the California recall election back on track for October 7th.

You also could tell that most of the appellate judges were searching for a way to avoid any direct confrontation with the U.S. Supreme Court over the latter's famous Florida recount ruling in December 2000. Judging by its unanimous ruling Tuesday, the court succeeded grandly on both counts.

Choosing the path of least resistance and controversy, the panel sided with the trial judge, who decided last month to permit the election to proceed as scheduled, and ruled against three of their appellate colleagues, who last week voted to delay the recall effort.

The pro-delay plaintiffs were pretty well doomed from the moment the court agreed to review with great deference U.S. District Judge Stephen V. Wilson's ruling last month that the election could proceed on October 7th.

By assenting to such a deferential review, the court was able to spend precisely one paragraph dismissing the plaintiffs' constitutional claim that the use of punch-card ballots in some counties but not others violated the equal protection rights of certain voters. "We conclude," the 9th Circuit simply ruled, "that the district court did not abuse its discretion in holding that the plaintiffs have not established a clear probability of success on the merits of their equal protection claim."

After quickly dispatching the plaintiffs' constitutional claim, the appellate panel then tackled-- in just another medium-sized paragraph-- the plaintiffs' statutory claim that the voting rights of minority voters would be impermissibly violated by the use of punch-card ballots.

Here, the procedural posture of the case helped California's Secretary of State and hurt the plaintiffs. "There is," the court found, "significant dispute in the record... as to the degree and significance of the disparity" caused by the use of punch-card ballots in counties with large minority populations. The dispute in the record permitted the court to conclude that the plaintiffs had not met their burden of proof to get the injunction that would had delayed the election.

Having spent roughly one page of their 13-page ruling dismissing the two main elements of the plaintiffs' case, the 9th Circuit then dedicated nearly two full pages to the "material hardship" the "state of California and its citizens" would suffer if the recall election were delayed.

After "weighing the hardships and considering the public interest"-- another element of injunctive relief-- the judges came down resolutely on the side of an October recall election "by virtue of the enormous resources already invested in reliance on the election proceeding on the announced date." These investments of time, money and the exercise of citizenship rights cannot be returned," the court announced. "In short, the status quo that existed at the time the election was set cannot be restored because this election has already begun."

Nearly two pages explaining what horrible waste would occur if the election were delayed. Only two sentences given to an analysis of the plaintiffs' interests in delaying it. All the judges could muster on the other side of the balancing test was a nod to the fact that some Californians have a right to be "legitimately concerned that use of the punch-card system will deny the right to vote to some voters who must use that system."

However, it was merely a "speculative possibility," the court concluded, that such a denial "will influence the result of the election." In other words, not everyone's vote gets to be counted but in most cases the votes that don't count don't matter anyway because they don't affect the outcome of elections. It's the old "no-harm, no-foul" election rule that made plenty of sense until Florida 2000.

Because this was a case about injunctive relief, the ruling doesn't resolve or dissolve on the merits all of the equal protection and Voting Rights Act claims made by the plaintiffs. It probably just delays them. If the recall election is close, and if there are reports of those punch-card ballots being as lame as we all know they can be, the plaintiffs will likely be right back in court demanding a recount-- yes, a recount-- a la Bush v. Gore. If that happens, the argument will be that the voting problems aren't merely a "speculative possibility" but instead a tangible reality.

The 9th Circuit's ruling Tuesday was a paean to the judiciary's fear of being too proactive. On October 8th, we'll have a better idea of whether it will need to be reactive. If you want to see another messy recount fight, hope that the margin of error October 7th is greater than the margin of victory. If you want judicial peace, hope for a rout.