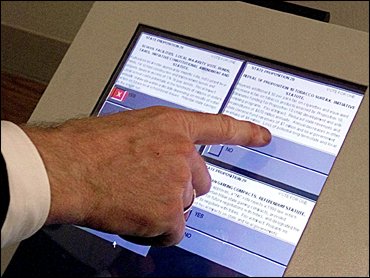 In a decision that has national implications, the Colorado Supreme Court threw out the state's new congressional districts Monday, saying the GOP-led Legislature redrew the maps in violation of the state constitution.

The General Assembly is required to redraw the maps only after each census and before the ensuing general election — not at any other time, the court said in a closely watched decision.

Under the ruling, Colorado's seven congressional districts revert to boundaries drawn up by a Denver judge last year after lawmakers failed to agree.

This ruling will be closely read in both Texas and in Pennsylvania, two other states that have their own redistricting battles, as well as by the justices of the U.S. Supreme Court, who this month are reviewing one of those redistricting fights, says CBSNews.com Legal Analyst Andrew Cohen. The Colorado ruling isn't binding outside of the state but it probably can and will be used by Democrats to argue that these sorts of redistricting efforts aren't legal.

The issue before the court was whether the redistricting map pushed through the Legislature by Republicans this year was illegal. Colorado's constitution calls for redistricting only once a decade and Democrats contended that task was completed by the judge.

Republicans said the map drawn by the judge was temporary and the law requires redistricting work to be done by the Legislature.

Republicans now hold five of the state's seven congressional seats. Democrats hope to pick up two of those seats if they win the court fight.

Democrats need to gain 12 seats to take control of the 435-member House, an uphill fight in view of state-by-state redistricting in 2001. A GOP redistricting plan in Texas could add to the GOP majority in Washington, though that plan is also being challenged in court.

"We're back to the old maps. This is a blow to Republicans nationally," said Tom Downey, attorney for the state Democratic Party. He said the GOP redistricting effort was part of a national plan led by the White House.

Carl Forti, spokesman for the National Republican Congressional Committee in Washington, said the battle isn't over because a similar challenge to the Colorado districts is pending in federal court in Denver.

"This was expected. It's far from over. There's still a federal case to play out," Forti said.

Political experts say if the redistricting plans in Colorado and Texas are allowed to stand it could lead to similar changes nationwide.

The battle over the redistricting plan in Texas took months to resolve, as Democratic legislators twice held it up by boycotting legislative sessions.

Texas House Democrats broke a quorum in their chamber, killing the redistricting effort, when they fled to Ardmore, Okla., in May. Senate Democrats fled to Albuquerque, N.M., for the full second special legislative session. The Senate Democrats returned reluctantly after one of their group decided to return to Texas.

Republicans have said they could pick up as many as six additional seats in Texas' 32-member delegation, which is ruled 17-15 by Democrats. Democrats said the map would add seven Republicans.