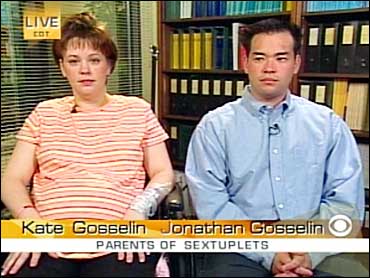 On Monday, she gave birth to six healthy babies in Hershey, Pa. It's the state's second set of sextuplets born in just over a year.

Kate, 29, and her husband Jonathan, 27, talked to The Early Show co-anchor Rene Syler from the Hershey Medical Center Friday about the new additions to their family.

The babies, in order of birth are:

All but Alexis Faith have been weaned from their ventilators, and doctors say their prognosis is good.

Like many women who have multiple births, Kate Gosselin was taking fertility pills before her pregnancy. Asked how her pregnancy was, she says, "Oh, don't ask. Let's just put it this way. It's my last forever."

High-order multiple pregnancies, like Gosselin's, come with risks. In addition to more calories, more rest and more intensive prenatal care needed by the mother, the risk of extremely premature delivery is of great concern. All high-order multiples on record have been born before 37 weeks of gestation. An infant is only considered full term at 37 weeks. No case of sextuplets' births in the United States has gone past 31 weeks of gestation. Gosselin was in her 30th week when she delivered.

And the couple is sure there are no more babies in their future. Kate says, "Eight is certainly enough."

The babies were delivered by a team of more than 75 - six color-coded, letter-coded resuscitation teams, one for each baby.

"Each baby had, I believe, a doctor and three nurses," Jonathan Gosselin says, "I took a head count in the room and there were 27 people. But outside of the room, there was the rest. There was a second room with three baby-like cradles for each of the babies, a, b, and c. Then d, e, and f were in the operating room. Everything went very smoothly.

Jonathan Gosselin says, "We prayed before Dr. Botti started. And then after that, everything went as clockwork and as planned. It was like a conveyor system. It was really nice."

Once they go home, the Gosselins expect the support of friends and family.

Kate Gosselin says, "I think they're saying six to seven weeks they'll be in. And our church body is 750 people. They're hoping to have 100 people on the volunteer list. And, actually, we're getting calls and resumes sent for people that we don't know that want to help."

The Gosselins are also the parents of 3-year-old twins. Asked what the twins think of the new babies, Jonathan Gosselin says, "They're excited to be big sisters. They are. We took them in Tuesday and they're ready to take them home already. "

Kate Gosselin is a registered nurse in labor and delivery at The Reading Hospital and Medical Center, where she completed nursing school.