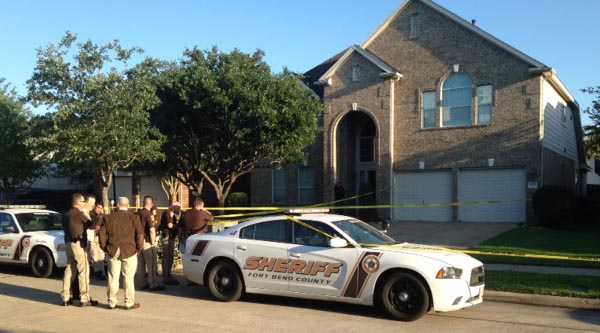 SUGAR LAND, Texas - A husband and wife have been found fatally shot at their Houston-area home and their two children were wounded in the apparent domestic dispute.

The Fort Bend County Sheriff's Office says the bodies of the man and the woman were located Monday morning at a home near suburban Sugar Land. Spokesman Bob Haenel says no suspects are being sought. Investigators are trying to determine if the shootings involved a murder-suicide. A handgun was retrieved from the home and deputies have reportedly said there were no signs of forced entry.

Haenel says the couple's wounded 11-year-old son and 15-year-old daughter were transported to a Houston hospital. Both underwent surgery and were listed in stable condition.

Haenel says the 15-year-old managed to call 911 despite suffering a gunshot wound. The 11-year-old also suffered from gunshot wounds, according to CBS affiliate KHOU.

The sheriff's office has no history of domestic violence with the family.

"She has a daycare in Rosenberg, and he has a convenience store," Nimet Lakhani, a church friend of the family said of the couple, according to KHOU. "I mean, a very happy family. I don't know what went wrong over here."

A neighbor of the family, Qudsia Taqva, told the station that the boy and her son would play together often. She said she was shaken by the news.

No names have been released.