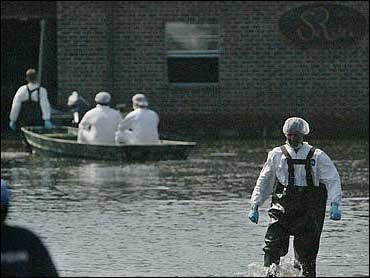 Homicide charges were filed against the husband-and-wife owners of a nursing home where 34 elderly patients are believed to have died during Hurricane Katrina, the first major criminal case related to the storm's still rising death toll.

For Louisiana alone, the toll surged by more than half Tuesday to 423, and officials fear the numbers could climb as floodwaters recede and more of the city becomes accessible to search teams. Including deaths in four other states, Katrina's overall death count stood at 659.

"It's the water. Everything is driven by the water," said Lt. Col. Mike Thompson of the Oklahoma National Guard.

Authorities said the toll would have been lower if Salvador and Mable Mangano, owners of the St. Rita's nursing home in town of Chalmette, had heeded warnings to evacuate their patients as Katrina came ashore Aug. 29.

"They are in low land. They had evacuated before. They knew they should have evacuated. They should have used their evacuation plan and moved those patients to safety," Louisiana Attorney General Charles Foti said Wednesday on CBS News' The Early Show.

They also turned down an offer from St. Bernard Parish officials who asked if the nursing home wanted help evacuating, he said.

"They were given the opportunity to move. They also had a contract with an ambulance to move the patients. They did not move the patients. And that resulted in a loss of 34 lives," Foti told co-anchor Harry Smith. "These are patients that are in wheelchairs, walkers, and cannot take this type of action and they drowned."

The Manganos were released on $50,000 bond each; each of the 34 counts against them carries up to five years in prison. Their attorney, Jim Cobb, said his clients were innocent and had waited for a mandatory evacuation order from the officials of St. Bernard Parish that never came.

The attorney general is also investigating the discovery of more than 40 corpses at flooded-out Memorial Medical Center in New Orleans. A hospital official said the 106-degree Fahrenheit heat inside the hospital as the patients waited for days to be evacuated likely contributed to their deaths.

The updated Louisiana death toll was released as Gov. Kathleen Blanco lashed out at the federal government, accusing it of moving too slowly in recovering the bodies. The dead "deserve more respect than they have received," she said.

However, Federal Emergency Management Agency spokesman David Passey said the state asked to take over body recovery last week. "The collection of bodies is not normally a FEMA responsibility," he said.

Mayor Ray Nagin said the city doesn't have the cash to keep paying its employees and was working "feverishly" with banks and federal officials to secure a line of credit to get the city through the end of the year.

Local authorities have been issuing more passes allowing residents to return to the city for the day to check on their businesses, save vital records and retrieve data from computers — although some people arriving by a highway south of the city had to endure a four-hour wait at a checkpoint.

The Army Corps of Engineers reported significant progress pumping out flooded areas of New Orleans and neighboring parishes. They are pumping as much as 9 billion gallons a day.

Col. Duane Gapinski estimated that half of the flooded area or less was still under water, and the city was on target to be almost completely drained by Oct. 8. More than 40 pumping stations were operating, including the city's biggest pump.

"That will change the world as we know it," Nagin said.

The news was more gloomy to the east in St. Bernard Parish, where more than 90 percent of an 17-foot-high levee is damaged and nobody will be allowed to return for four months.

"I think about 95 percent of the parish was under water. I would say it's pretty well destroyed," said Col. Richard Baumy of the St. Bernard Parish Sheriff's Office. "You've got to see it to believe it."

Dan Packer, chief executive of Entergy New Orleans, said the company had restored power to 75 percent of the 1.1 million customers who were out at the height of the storm, mostly in Mississippi and areas of Louisiana north and west of New Orleans.

Packer said about 264,000 customers were without power Tuesday afternoon, largely in the metro New Orleans area. He said all of the central business district and French Quarter should have power back within two weeks.

Two hospitals in parts of town that remained dry could reopen soon, another requirement for residents to be allowed back permanently.