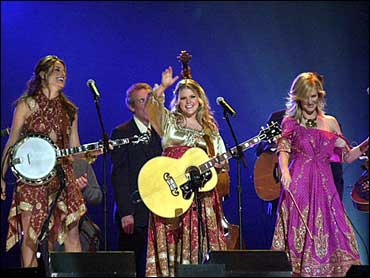 Country music, one of the few bright spots in a down year for music sales, is well represented at this year's Grammys with the Dixie Chicks and Alan Jackson up for awards in major categories.

The Chicks are candidates for album of the year with their rootsy "Home," while Jackson is nominated for song of the year with his poignant "Where Were You (When the World Stopped Turning.)"

"It is a big deal, and it doesn't happen very often," said Neil Pond, editorial director of Country Weekly and Country Music magazines.

Only twice before has a country artist been nominated in both categories in the same year, according to the National Academy of Recording Arts & Sciences, which awards the Grammys.

Bobbie Gentry did it in 1967 with the album and song "Ode to Billie Joe," and Shania Twain in 1998 with the album "Come on Over" and the song "You're Still The One."

Pond said the Chicks and Jackson have strong crossover appeal while remaining true to their roots.

"They encapsulate all that is good about country and where it can go commercially," he said.

Country accounted for four of the nation's 10 best-selling discs in 2002: the Chicks' "Home," Jackson's "Drive," Twain's "Up!" and the "O Brother, Where Art Thou?" soundtrack, which won the best album Grammy last year.

"Country obviously benefited from several of its top-tier superstar acts releasing albums late in the year" during the Christmas shopping season, Pond said. "And when those big dogs start barking, it wakes up the whole neighborhood."

Country was the only genre to see a significant sales increases from 2001; jazz sales were up slightly.

Country grew 12.2 percent, commanding 11.8 percent of total music sales for the year, according to Nielsen SoundScan's year-end music industry report. In 2001, country had a 1.2 percent increase with 9.6 percent of total sales.

Overall, the recording industry experienced its second straight year of decline, with sales slipping 10.7 percent from 2001.

Pond said the timing is right for another spike in country music, which had its last boom in the early and mid-1990s.

"Country has always been a lot like the stock market," he said. "It is up and down and very cyclical. Historically, country music has done better than other forms of music in times of economic and other kinds of turmoil."

Wade Jessen, director of country charts for Billboard magazine, said it's difficult to tell whether 2002's strong showing was an anomaly or whether it represents the beginning of a trend.

"There are two things that are unknowns at this point," Jessen said. "Will country break a big new act that sells those kind of numbers? And how will those superstar releases sell through this new year?"

Pond predicts that with several major acts touring - including the Dixie Chicks, Kenny Chesney, Toby Keith, Faith Hill and Tim McGraw - sales should remain brisk at least through this year.

"There is an amazing amount of country fire power on the road, and that will continue to stir the pot," he said.
By JOHN GEROME