(CBS)
The Slovene lands were part of the Austro-Hungarian Empire until the latter's dissolution at the end of World War I. In 1918, the Slovenes joined the Serbs and Croats in forming a new multinational state, which was named Yugoslavia in 1929.

After World War II, Slovenia became a republic of the renewed Yugoslavia, which though Communist, distanced itself from Moscow's rule. Dissatisfied with the exercise of power by the majority Serbs, the Slovenes succeeded in establishing their independence in 1991 after a short 10-day war.

Historical ties to Western Europe, a strong economy, and a stable democracy have assisted in Slovenia's transformation to a modern state. Slovenia acceded to both NATO and the EU in the spring of 2004. 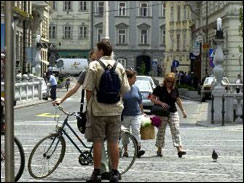 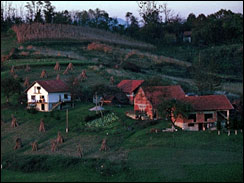 With a GDP per capita substantially greater than the other transitioning economies of Central Europe, Slovenia is a model of economic success and stability for its neighbors from the former Yugoslavia. The country, which joined the EU in May 2004 and joined the eurozone on 1 January 2007, has excellent infrastructure, a well-educated work force, and an excellent central location. Privatization of the economy proceeded at an accelerated pace in 2002-05. Despite lackluster economic performance in Europe in 2001-05, Slovenia maintained moderate growth. Structural reforms to improve the business environment have allowed for greater foreign participation in Slovenia's economy and have helped to lower unemployment. In March 2004, Slovenia became the first transition country to graduate from borrower status to donor partner at the World Bank. Despite its economic success, Slovenia faces growing challenges. Much of the economy remains in state hands and foreign direct investment (FDI) in Slovenia is one of the lowest in the EU on a per capita basis. Although tax reforms were implemented in December 2006, taxes are still relatively high. The labor market is often seen as inflexible, and legacy industries are losing sales to more competitive firms in China, India, and elsewhere. The current center-right government, elected in October 2004, has pledged to accelerate privatization of a number of large state holdings and is interested in increasing FDI in Slovenia. In late 2005, the government's new Committee for Economic Reforms was elevated to cabinet-level status. The Committee's program includes plans for lowering the tax burden, privatizing state-controlled firms, improving the flexibility of the labor market, and increasing the government's efficiency.

Currency (code):
euro (EUR)
note: on 1 January 2007, the euro became Slovenia's currency; both the tolar and the euro were in circulation from 1 January until 15 January 2007

The Last Days Of Slobo
See Slobodan Milosevic's dramatic fall from power, learn about the U.N. war crimes tribunal and follow the history of political and social strife in the Balkans.