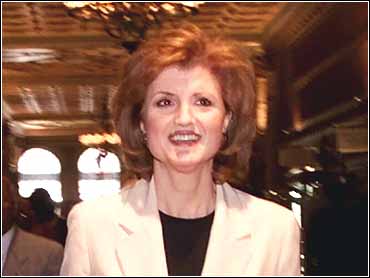 The Republican National Convention will have some competition in the political theater department from a four-day spectacle that's part grassroots happening and part celebrity salon.

Shadow Conventions 2000 is the brainchild of Arianna Huffington, a glamorous columnist and former Washington hostess who used to be conservative, but now she's liberal … well, never mind, she's famous.

With a handful of high-ranking politicians (two senators, a governor, a congressman and the Rev. Jesse Jackson), joining nationally known clergymen, activists, academics, journalists, and at least one actor, the Shadow Convention just might attract the coverage it craves.

Like the Republican convention, each day revolves around a different theme. On Monday: campaign finance reform. On Tuesday: drug policy. On Wednesday: poverty. And last but not least, on Thursday: the role of the media. (Presumably, the media has been complicit in keeping the first three topics from their rightful place in the national debate...) Each day's events begin around 10 a.m. and stretch into the evening with "culture jams" of pundits and performing artists.

Ironically, this campaign finance consciousness-raising would not be possible were it not for the generosity of George Soros, a man whose name rarely appears in print unaccompanied by the words "billionaire financier." Soros is the main benefactor of the Lindesmith Center, a drug policy reform organization that is co-hosting the Shadow Conventions.

Shadow Conventions 2000 is "not an end in itself," said Lindesmith executive director Ethan Nadelmann. "They're a vehicle to garner substantial media attention on drug policy … Part of our objective is to say there are new issues in town that [voters] should start paying attention to."

Nadelmann thinks Tuesday may be the "single biggest one-day event in the young history of drug policy reform movement."

The Lindesmith Center recently took out a two-page centerfold ad in The Philadelphia Inquirer newspaper that showed George W. Bush on one side and first-time and nonviolent incarcerated drug offenders on the other beneath these words: "His Youthful Indiscretions …Their Shattered Lives." The ad alludes to Bush's evasive responses to reporters' questions about whether he used drugs as a young man.

While the Shadow Convention doesn't have a single objectie the way the nominating convention does, Lindesmith said there are links among the three issue areas. For example, he says, while drugs are "used equally across all economic strata in society," poor people are more likely to get arrested for drug offenses and less likely to get treatment for drug problems than middle class people.

A link between campaign finance and drug policy would be a recent government aid package to Columbia. Republican Congressman Tom Campbell will speak out against the aid at the Shadow Convention.

Some of the daytime issues panels promise to be think tank seminars on acid. What will Chuck D have to say to Renata Adler, a woman who wrote an entire memoir about what's wrong with The New Yorker magazine?

Harper's magazine editor Lewis Lapham, a satirist who favors decriminalization of drugs, admitted he's going to the Shadow Convention because it's fun. "I'm getting involved because I want to see Philadelphia in convention week."