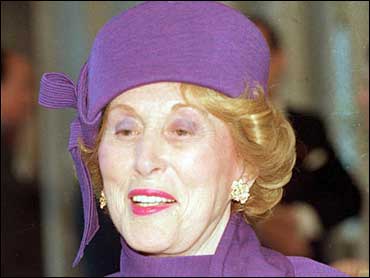 Estee Lauder, who started a kitchen business blending face creams and built it into an international cosmetics empire, has died. She was believed to be 95.

In 1998, Lauder was the only woman on Time magazine's listing of the 20 most influential geniuses of business of the century. Her company placed No. 349 in the 2003 ranking in the Fortune 500 list of the nation's largest companies, with revenue at $4.744 billion.

In explaining her success, the cosmetics queen once said: "I have never worked a day in my life without selling. If I believe in something, I sell it, and I sell it hard."

"Beauty is an attitude," she once said. "There's no secret. Why are all brides beautiful? Because on their wedding day they care about how they look. There are no ugly women — only women who don't care or who don't believe they're attractive."

A favorite selling tool has been offering a gift with a purchase - a giveaway that began out of necessity. Lauder started off without enough of an advertising budget to attract an agency, so she used the money instead for free samples.

She also courted the rich and famous.

"I don't know her very well, but she keeps sending all these things," said Princess Grace of Monaco, who became a friend.

She enjoyed entertaining in the grand manner, in her Upper East Side townhouse, her oceanfront home in Palm Beach, her London flat, her villa in the south of France.

But that was not how she grew up.

Born Josephine Esther Mentzer in the working-class Corona section of Queens, she was the daughter of Max and Rose Schotz Mentzer. Lauder never disclosed her birth date, but biographer Lee Israel reported that it was July 1, 1908.

Lauder said her family always called her Esty (pronounced ES-tee). When a public school official spelled it Estee, it stuck.

In 1930 she married a garment center businessman named Joseph Lauter (later changed to Lauder), and they had their first son, Leonard, three years later.

During the 1930s, she began selling face creams that her uncle John Schotz, a chemist, mixed up in a makeshift laboratory in a stable behind the family house. And she began experimenting with mixes herself.

While in her home kitchen, "during every possible spare moment, (I) cooked up little pots of cream for faces. I always felt most alive when I was dabbling in the practice cream," she said.

Lauder went to beauty salons where she gave free demonstrations to women waiting under hair dryers. More often than not, they became customers. Sometimes she stopped women on Fifth Avenue to try her products.

"If you put the product into the customer's hands, it will speak for itself if it's something of quality," she declared.

In 1939 she got a divorce and moved to Florida. Years later, she explained why: "I was married very young. You think you missed something out of life. But I found out that I had the sweetest husband in the world."

She and Joseph remarried in 1942, had a second son, Ronald, and went into business together. Her persistence in selling paid off in 1948, when she persuaded a buyer at Saks to place a sizable order.

She and her husband filled the order themselves, cooking up the creams in their factory, a converted restaurant, and bottling them in attractive jars. In two days, Saks sold out and the company was on its way.

While her husband handled the business at home, she traveled to each new store that took her line and personally selected and trained the new saleswomen.

Packaging developed by Lauder in a delicate shade of greenish blue -hosen because it complemented virtually any bathroom décor - ecame a trademark.

Estee Lauder became a household name in 1953, when the company debuted Youth Dew, a bath oil and perfume. Over the years she added new lines and new products, fragrances such as White Linen and Cinnabar, the Aramis line of men's toiletries and the Clinique line of fragrance-free, allergy-tested products.

She dueled with archrival Charles Revson, who built the Revlon empire.

"She was the one competitor he set out to beat but couldn't," wrote Revson biographer Andrew Tobias.

As the privately held company grew, Lauder and her husband involved their sons in the decision making. Leonard Lauder took over as chief executive officer in 1982, the year before Joseph Lauder died, and nearly quadrupled annual sales by 1995. Ronald Lauder left the business for several years in the '80s, serving defense and ambassador posts in the Reagan administration and making a failed bid for mayor of New York. He then returned to the company.

In 1995, the company, long tightly held by family members, announced plans to raise $335 million in an initial public stock offering.

Lauder's assets, including her company stock and much of her real estate, had been put in recent years into a trust administered by her two sons and a longtime lawyer. Her public life dwindled after she broke her hip in 1994.

After being vague about her background for years, Lauder rushed her autobiography, "Estee: A Success Story," into print in 1985. Typically, she was out to beat the competition: in this case Israel's unauthorized biography, "Estee Lauder: Beyond the Magic."

Lauder and her husband were active in philanthropic work, including contributions to Memorial Sloan-Kettering Hospital in New York and the University of Pennsylvania, the site of the Joseph H. Lauder Institute of Management and International Studies.