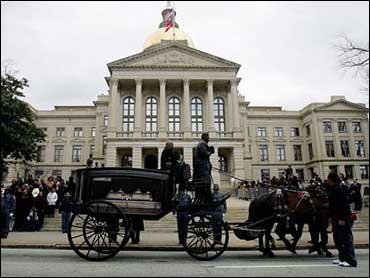 Cheered by hundreds of people, the body of Coretta Scott King was carried through the streets by horse-drawn carriage Saturday to Georgia's state Capitol, where she became the first woman and first black person to lie in honor.

King's four children, Gov. Sonny Perdue and his wife Mary, and Atlanta Mayor Shirley Franklin escorted the casket inside to the Rotunda as a bagpipe played Amazing Grace.

"Coretta Scott King was a gracious and courageous woman, an inspiration to millions and one of the most influential civil rights leaders of our time," Perdue said. "She was absolutely an anchor and support for her husband."

It was a striking contrast to the death of Martin Luther King Jr. in 1968, when then-Gov. Lester Maddox, an outspoken segregationist, was outraged at the idea of state flags, then dominated by the Confederate Cross, flying at half-staff in tribute to a black man. He ignored King's death, refusing to authorize a public tribute.

Coretta Scott King died Monday at an alternative medical clinic in Mexico at the age of 78. Immediately after, the state flag she helped to change, no longer bearing the Confederate battle emblem, was ordered lowered by Perdue.

For most of Monday, King's casket will lie in Ebenezer Baptist Church, where her husband preached in the years before his death. Her funeral will be held at New Birth Missionary Baptist Church in Lithonia, where the Kings' youngest child, Bernice, is a minister.

Few details have been released about the funeral, including who will deliver the eulogy. However, the American Jewish Committee said the King family invited the executive director of its Atlanta chapter to deliver remarks.

The King legacy is a major draw to Atlanta. The King Center, which is the site of Martin Luther King Jr.'s tomb, attracts thousands, along with his nearby birth home and Ebenezer Baptist Church.

When Martin Luther King Jr. died, segregation was openly accepted in the South, even though it was on its last legs, said Akinyele Umoja, an African-American studies professor at Georgia State University.

"Lester Maddox had a strong base. Now, you don't have that constituency," Umoja said.

"It became a national insult to Dr. King and the King legacy and the whole civil rights movement that was sweeping across the South, bringing about significant change," he said.