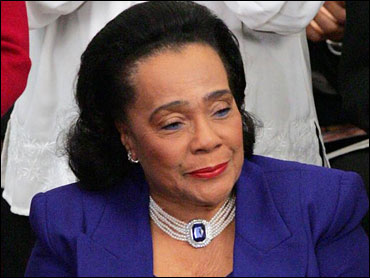 Coretta Scott King went home from the hospital Thursday more than a month after suffering a stroke and mild heart attack, and she faces more therapy but was expected to make a full recovery, her family and doctors said.

"Our prayers have been answered," said her daughter the Rev. Bernice King, who was flanked by her sister, Yolanda, at a news conference.

The 78-year-old widow of civil rights leader the Rev. Martin Luther King Jr. has been recovering at Piedmont Hospital since Aug. 16. The stroke initially left her unable to speak or move her right side, but she has made some recovery over the past five weeks, doctors said.

"She did very well in rehab," said Dr. Maggie Mermin, King's doctor. "She makes progress every day. We're very hopeful that she'll never have another (stroke)."

During her hospitalization, King participated in three hours of daily therapy. On Wednesday, she twice made an 80-foot "victory walk" with the use of a walker, Mermin said.

Doctors and family members said she will continue to undergo rehabilitation at her home six days a week.

"My mother has a very strong determination to succeed," Bernice King said. "She looked forward to therapy and was full of joy and very focused."

King has regained some of her speech and comes up with a lot of spontaneous phrases, Mermin said, adding, "She's really coming along."She and her husband married in 1953. After his assassination in Memphis, Tenn., on April 4, 1968, she kept his dream alive through the Atlanta-based King Center while also raising their four children.

The family plans to celebrate King's homecoming privately with friends.

"Our mother is coming home, and we are so grateful and so thankful that this is happening," Yolanda King said.