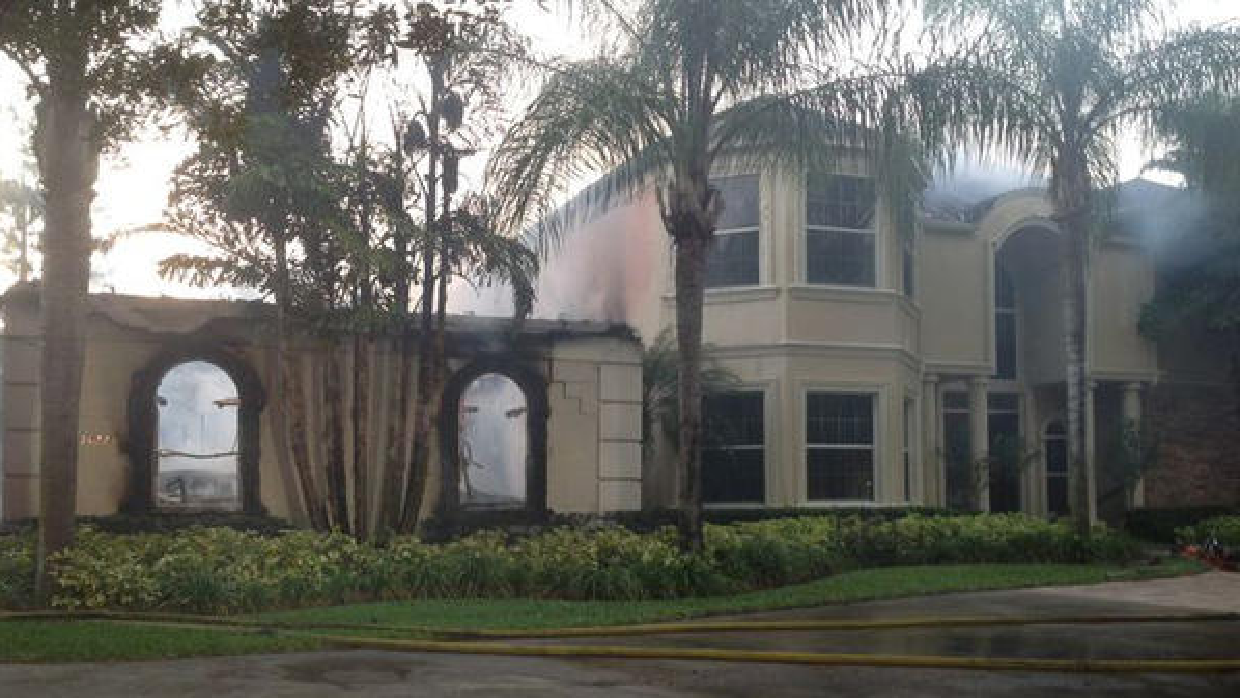 TAMPA, Fla. - A man, his wife and their two teenage children were shot before the million-dollar home they were renting burned down in what investigators called arson, a fire perhaps exacerbated by fireworks and gasoline, authorities said Thursday.

Autopsies were still being completed to determine how they died, but investigators have said they are looking into the possibility of a murder-suicide. Authorities recovered a gun at the home registered to Darrin Campbell and he bought an "exceedingly large amount" of fireworks and gas cans days before the fire, Hillsborough County Sheriff's Col. Donna Lusczynski said.

Authorities still have not positively identified the bodies, but the family has not been accounted for and a relative said they were inside the home when it burned.

As flames shot through the roof Wednesday morning, neighbors reported explosions, presumably hearing fireworks go off inside. Authorities have not indicated who may have started the fire or why.

Campbell bought $650 of fireworks on Sunday and authorities said fireworks were found throughout the five-bedroom home. Still, it wasn't clear what role the fireworks might have played, though Lusczynski said they could've been used to ignite the fire or keep it going.

Campbell had been an executive for several high-profile businesses. He was currently working at a records management firm and volunteering as treasurer at his children's private school. His wife, Kimberly, was a stay-at-home mom, according to her father, Gordon Lambie.

The family moved to Tampa more than a decade ago. They sold their home in 2012 for $750,000 and signed a two-year lease for the 6,000 square-foot home owned by former tennis pro James Blake. He bought the home in the Avila community in 2005 for $1.5 million, according to property records.

Avila is known for its mansions, heavy security, country club and golf course. Many well-known athletes have called the community home over the years.

Nineteen-year-old Colin Campbell was a talented baseball player who planned to graduate high school next month. His teenage sister, Megan, was a ninth-grader who made an honor roll and took dance lessons.

"We honestly can't believe it," he said. "For it to happen to somebody that nice is unreal."

Bolling said the Campbells were "dearly loved by everyone."

Megan Campbell was "sweet. She was just a sweet little girl," he said.

The teens' grandfather said he was in shock.


"I've lost my entire family," Lambie said from his Michigan home. "It's very tough right now because I'm 1,500 miles away."

Campbell bought six packages of firecrackers and about the same number of fireworks designed to shoot into the air, said William Weimer, vice president of Ohio-based Phantom fireworks. He described them as backyard fireworks someone might set off on the Fourth of July.

He said the fireworks could have started a fire but it would have spread slowly. The amount of powder inside each one was smaller than an aspirin, he said.

A store manager, Rocky DiRoma, said there was nothing unusual about the $650 purchase.

"He was just an average Joe," DiRoma said.

Another 911 caller, a security manager for the gated community, told dispatchers the fire was in the garage.

Darrin and Kimberly met in Lansing, Michigan, when they both worked as aides in the state legislature, her father said. Kimberly Campbell had graduated from Central Michigan University and Darrin Campbell had an MBA from the University of Michigan.

They lived in San Antonio, where Campbell was an executive with Pearl Brewing Company, before moving to Tampa.

At some point, he became senior vice president at PODS, the mobile storage company, and left in 2007. He was currently chief operating officer at Vastec, where he worked for the past six months.

Friends of the teens gathered Wednesday and released balloons with messages on them as a remembrance.

"We know nothing of any problems," Connley said. "The kids were outstanding children. This is very difficult to put our arms around."