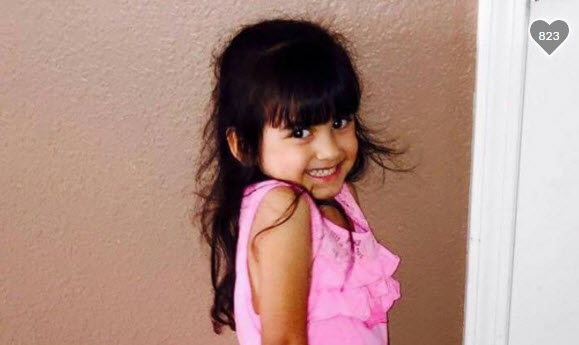 ALBUQUERQUE, N.M. -- Police said a man confessed to fatally shooting a 4-year-old girl while arguing with her father as the two men drove down a freeway in separate cars in an apparent road-rage slaying.

Tony Torrez, 32, was arrested Wednesday. Police said he admitted shooting Lilly Garcia while she was riding in the backseat of her father's pickup truck with her 7-year-old brother. Torrez has been charged with murder, assault, child abuse and other crimes. He was being held on a $650,000 cash-only bond.

Police said Torrez was apprehended with help from an anonymous caller and other tips from the community.

Speaking to the Associated Press Thursday outside the family's home, the child's grandfather, Jose Garcia, said in Spanish that something has to be done about gun violence. He said that this type of tragedy should never happen and the murder has left the family in deep mourning.

The children's father had picked the two children up from school Tuesday when someone in another vehicle opened fire on the family as they traveled on Interstate 40, Albuquerque's main east-west freeway.

The father told authorities that he was trying to exit the freeway when a red car forced him out of his lane, a police statement said.

Garcia said he threw up his hands and gestured towards the red car's driver, yelling an expletive at him, according to a criminal complaint obtained by CBS affiliate KRQE. He said the red car's driver said something in response, but he didn't know what.

Garcia said he accelerated to try and put distance between the two cars, and that's when he heard two shots strike his vehicle.

His son told him his sister was bleeding, according to the complaint.

Garcia said the red car continued to pursue him, and the driver fired twice more at his car.

The complaint says 911 dispatchers received a call about two hours later from a caller who refused who identify himself, saying, "I'm actually calling about the four-year-old I shot on I-40."

The caller "continually" asked for a description of the vehicle the police were looking for, saying, "I just want to find the person." The caller asked the dispatcher if he could give her information "off the record," and then hung up, according to the complaint.

After the shooting, the girl's father pulled over and tried to give his daughter first aid as a bystander called 911.

In a roughly minute-long call released by police, a man alerts a dispatcher to a truck stopped on an I-40 median with "an adult holding an unresponsive child."

Two nurses showed up and tried to save the girl's life before an ambulance rushed her to the hospital, where she died, Albuquerque Police Chief Gorden Eden said.

Authorities quickly began pressing the public for tips, offering about $25,000 for information leading to the arrest of the shooter, who was driving a newer-model maroon or dark red Toyota Corolla or Camry with a spoiler on the trunk and dark tinted windows. The car also had a University of New Mexico license plate.

It was not clear exactly what led the incident to escalate, but the father told officers the shooting was the result of road rage.

Torrez has been tied to violent crimes in New Mexico dating back a decade, but all of those cases were dropped. KRQE reported the arrests included allegations of child abuse, domestic violence and aggravated battery with a deadly weapon.

The only crime for which he's been prosecuted was a misdemeanor speeding violation. He pleaded guilty to going 16 to 20 mph over the speed limit in April 2013, according to court records.

Lilly's death spawned an outpouring of sympathy nationwide. A GoFundMe account for funeral services and other expenses has generated more than $64,000 since it was posted Tuesday. The hashtag #JusticeForLilly began showing up on social media.

A neighbor, who said her grandson played with Lilly, told KPHO he remembered her always smiling.

The child's father reportedly wrote on his Facebook page that the girl was "the light of his life."

In a statement, Albuqurque mayor Richard Berry said the murder "has broken our hearts and cut to the core of our community," reports the station.

"Make no mistake; this act of violence will not go unanswered," Berry said. "The Albuquerque Police Department will work tirelessly with other law enforcement agencies to bring this criminal to justice."