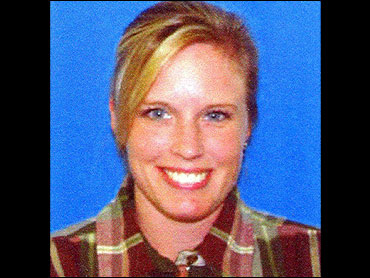 Police say the only survivor of a shooting that left his wife and three children dead in their sport utility vehicle was questioned and is not a suspect in the attack.

The Chicago Sun-Times is reporting that the husband, Christopher Vaughn, told police that his wife fired the shots.

No charges have been filed in the case so far, and Vaughn has been released after being questioned for several hours. He was treated at a hospital for a gunshot wound to the leg.

The bodies of Kimberly Ellen Vaughn, 34, and her children — Abigayle Elizabeth, 12, Cassandra Ellen, 11, and Blake Philip, 8 — were discovered around 5:25 a.m. Thursday. They were found in the family's SUV parked on a service road near Interstate 55 in Channahon after a passer-by called 911, authorities said.

The husband was with the caller until police arrived, Illinois State Police Capt. Carl Dobrich said.

A handgun was found at the scene, Dobrich said.

Vaughn left the Illinois State Police District 5 offices early Friday after telling authorities he wanted to rest, Illinois State Police Master Sgt. Cheryl Lisy said. She said he was never in custody and left "of his own free will." She said she did not have information about investigators' interviews with him.

Dobrich said police did not think anybody else was involved in the shootings.

"This event we believe is concentrated to what we have at the scene ... we are just trying to get down to the truth as to what actually happened," he said.

The Sun-Times reports that Vaughn, 32, told investigators the family was leaving for a trip when he pulled off Interstate 55 and parked to secure some luggage on top of their Ford Expedition.

Vaughn said that when he got back into the SUV, his wife began firing a handgun. He was shot in the leg, and he fled. Upon returning, he found his wife and children had all been shot.

State police would not confirm or deny this chain of events early Friday.

A police chaplain and counselors were available for police who responded to the scene of the shootings, Dobrich told reporters Thursday.

"To be blunt, I have kids at home that age," he said. "And it affected people there immensely. It was a very sad scene."

The tragic events seemed even more bizarre given the Vaughn family — who had moved to the Chicago area from Washington State — were recently featured in a Sun-Times article talking about settling into their "dream house" about a year earlier.

In the May 27 profile in the paper's real estate section, the family spoke of their enthusiasm for their new $340,000, four-bedroom house in an Oswego development. The article featured an idyllic photo of a relaxed Christopher and Kimberly Vaughn sitting at a dining table — their three children standing behind them, smiling.

"We really liked the small-town atmosphere of Oswego," Kimberly said. "We also checked on the schools our three children would be attending and found them to be highly-rated. We looked at the models, and we were very impressed."

A neighbor of the Vaughns' said he had never seen any signs of discord at the Vaughn household, where he said police detectives were working most of Thursday.

"They were very nice people, both the wife and husband ... they looked like a loving couple," said Mohammad Ansar. "They were like a perfect family if you saw them."

The mother would walk the kids to a school bus in the morning, said Ansar, adding that the three children "were very cute" and "very well behaved."

Ansar described Kimberly Vaughn as "a homemaker" who got a degree online last year. Another neighbor, Tony Bridges, told the Tribune it was a criminal justice degree.

Christopher Vaughn's mother, Gail Vaughn, told the Chicago Sun-Times that her son didn't appear to have any marital problems.

"They're a fantastic family," she said. "They really work together."

Kimberly Vaughn's sister, Nikki Isemann, told the Chicago Tribune that her sister was looking forward to a romantic getaway this weekend with her husband.

"Kim was very excited about it, getting last-minute things packed," she said. "Her husband, he adored her. He would do everything for her."