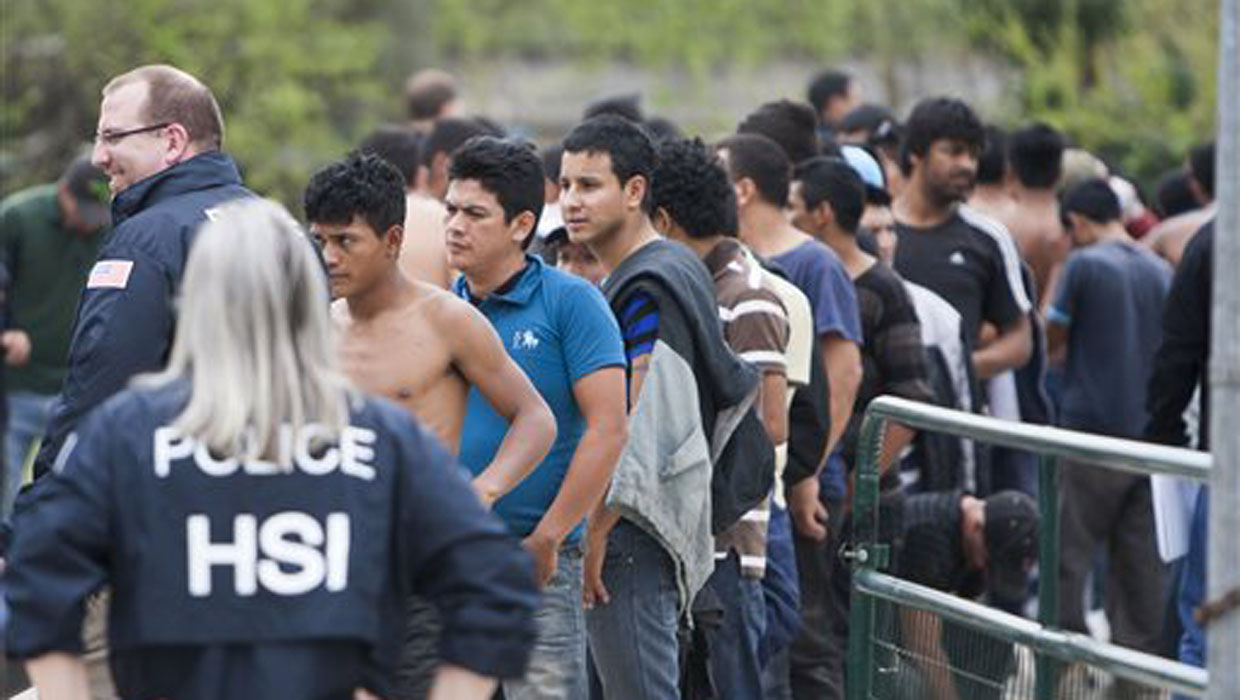 HOUSTON, Texas - A house overflowing with more than 100 people presumed to be in the U.S. illegally was uncovered just outside Houston on Wednesday, a police spokesman said. Authorities also said five men have been arrested in connection with the case.

The suspected stash house was found during a search for a 24-year-old woman and her two children, a 7-year-old girl and a 5-year-old boy, that were reported missing by relatives late Tuesday after a man failed to meet them as planned at an undisclosed location on the city's north side, said John Cannon, a spokesman for the Houston Police Department.

Many of the people in the home, that authorities said appeared to be part of a human smuggling operation, were dressed only in undergarments and were sitting in filthy conditions and surrounded by trash bags full of old clothing, Cannon said.

When police opened the door to the home they found "a large, large group of people, some sitting on top of one another, very confined spaces," Cannon said. "They yell out the woman's name to see if she is in there, and she emerges with the two children. They're okay."

The single-family home, in southern Harris County, is about 1,500-square-feet, Cannon said. At first, officers saw only a mattress on the floor and a refrigerator in an exterior room. It was when they went further into the house that they found the people - 94 men, all in their undergarments and shoeless; 15 women; and the woman with her two children - lying in filth in several small rooms, all with access to one bathroom and no hot water.

Many of the women said they had been in the house for three or four days, Cannon said. One woman said she had been there for 15 days. All of them said they were hungry, thirsty and tired.

"It was just filth, very squalid-like conditions inside. Trash bags with clothing piled as high as you can see," Cannon said. "They were very surprised at the numbers of people inside. Some were just sitting on top of one another because there was just no room."

Houston police have handed the investigation over to U.S. Immigration and Customs Enforcement. ICE spokesman Greg Palmore said it has been five years since officials uncovered a house in the Houston area with this many people inside. In 2012, a house with 86 people was discovered, he said.

ICE took the people in the home into custody and they will be questioned and fed, Palmore said. The people were primarily from Guatemala, Mexico, Honduras and El Salvador, he said. Two of the people, a pregnant woman and a man, have been taken to a hospital for unknown treatment, he added. Although Palmore said it was too early to say whether this was part of a human trafficking operation, he said it appeared that way.

Houston sits about seven hours from the Mexican border, making it a popular route for immigrants, Palmore explained.

"Houston is significant for the highway corridors that make up Houston, I-45 and I-10. With those two traffic corridors you can pan out anywhere in the United States," Palmore said. "And it's very easy to assimilate into the communities here."

The home was found after Houston police were tipped off that the woman and children they were looking for may have been taken there. Cannon said police set up surveillance points outside the house early Wednesday and pulled over a car with two men inside for a routine traffic stop when they saw them leaving the driveway. Handguns and documents that suggested illegal activity were found in the car, leading police to detain the two men and enter the house, he said.

After the people were removed and a count began, three men attempted to flee on foot, Cannon said. Those men have also been detained and are suspected of illegal activity as well. In addition, police found two coops with hundreds of chickens on the property that are part of an investigation into illegal cock-fighting, he said.

Police have not identified the suspects.