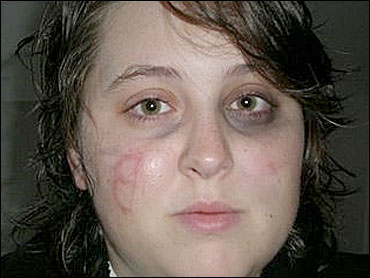 A John McCain campaign volunteer made up a story of being robbed, pinned to the ground and having the letter "B" scratched on her face in a politically inspired attack, police said Friday.

Maurita Bryant, the assistant chief of the police department's investigations division, said Todd is being charged with making a false police report.

Police doubted her story from the start, Bryant said.

"She just opened up and said she wanted to tell the truth," Bryant said, according to the Pittsburgh Tribune-Review. "She was upset with the media for blowing this into a political firestorm."

Todd, who is white, initially told police she was attacked by a 6-foot-4 black man Wednesday night.

She told investigators she was attempting to use a bank branch ATM when the man approached her from behind, put a knife with a 4- to 5-inch blade to her throat and demanded money. She said she handed the assailant $60 and walked away.

Todd claimed that she suspected the man then noticed a McCain sticker on her car, became angry and punched her in the back of the head, knocking her to the ground and telling her "you are going to be a Barack supporter," police said.

She said he continued to punch and kick her while threatening "to teach her a lesson for being a McCain supporter," police said. She said he then sat on her chest, pinned her hands down with his knees and scratched a backward letter "B" into her face with a dull knife.

Todd also told police she didn't seek medical attention, but instead went to a friend's apartment nearby and called police about 45 minutes later.

On Friday, when she admitted the story was fabricated, Todd told police she believes she cut the backward "B" onto her own cheek, but she didn't explain how or why, Bryant said.

"She said she doesn't remember doing it but knows it must have been her who did it," Bryant said, according to the Tribune-Review.

Todd reportedly said she thought of Barack Obama when she saw the "B" on her cheek and minutes later "came up what a plan" to manufacture the story, according to Bryant.

She now tells investigators she was neither robbed nor attacked.

"We had some serious cases going on, and this wasted so much time," Bryant said. "Our detectives have been working through the night just to verify the information we suspected was false from the beginning."

Bryant said somebody charged with making a false report would typically be cited and sent a summons. But because police have concerns about Todd's mental health, they are consulting with the Allegheny County District Attorney. She remained in custody and was awaiting arraignment.

Todd worked in New York for the College Republican National Committee before moving two weeks ago to Pennsylvania, where her duties included recruiting college students, the committee's executive director, Ethan Eilon, has said.

Authorities declined to release the results of that test, but investigators said they received photos from the ATM machine and "the photographs were verified as not being the victim making the transaction."

Police say they do not believe any other people were involved. They said Todd's friends believed the story about the attack.

Police suspected all along that Todd might not be telling the truth, starting with the fact that the "B" was backward, Bryant said.

"We have robbers here in Pittsburgh, but they don't generally mutilate someone's face like that," Bryant said. "They just take the money and run."