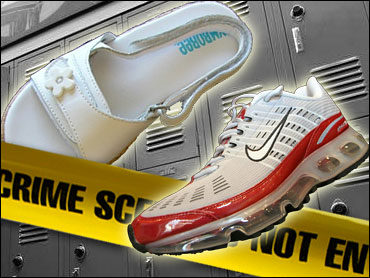 Police seized more than 1,500 pairs of girls shoes from the home and storage unit of a man arrested for breaking into a high school, police said Tuesday.

"He liked to smell them," said Lt. William H. Graham.

Police said the recovered shoes may be related to the burglaries of three Waukesha public high schools and a middle school over the past two years.

The 26-year-old Kenosha man, identified as Erik D. Heinrich by the Milwaukee Journal-Sentinel, worked for a cable company and collected keys to the schools as he responded to calls, Graham said. The same man was convicted in 2005 for stealing shoes from Kenosha Tremper High School.

"I'm laid off," Heinrich said in court Tuesday. "I was working as a forklift operator." He was charged with three counts of burglary in Waukesha County Circuit Court, the Journal-Sentinel reported.

Police arrested him after a security video showed him entering North High School on May 20 and leaving with some items, authorities said.

Officers searched the man's home and a rented storage unit on Thursday, recovering the shoes along with school yearbooks, keys, a bolt cutter and other items.

"I thought it was another student," Waukesha South sophomore Kirstin Cornwall, 15, said. However, when Cornwall, who said her tennis shoes were stolen last year, learned the suspect was in his late 20s, she called it "creepy."

"What kind of weirdo goes around stealing shoes?" she told the Journal-Sentinel.