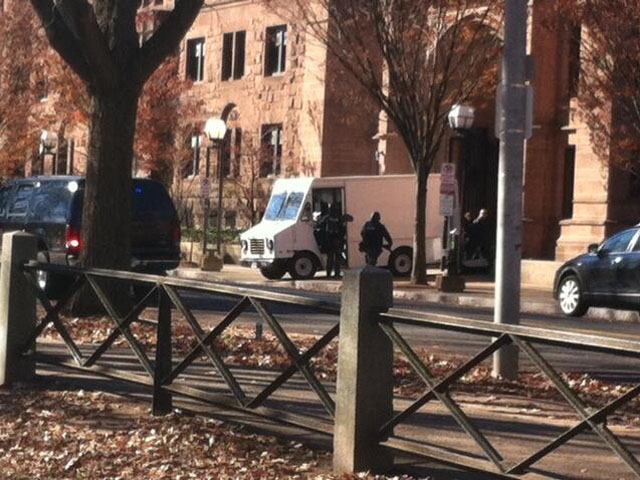 NEW HAVEN, Conn. - A man called police Monday morning and said his roommate was coming to the Yale University campus with the intention of shooting people, police said during a news conference Monday afternoon.

Officer David Hartman of the New Haven Police Department said officials don't know who the caller was. It wasn’t clear whether the caller or the possible suspect was a Yale student.

The call was placed from a payphone near campus and was cut short by the caller after a few seconds, Hartman said.

Police earlier said they were  interviewing at least two witnesses who said they saw a person on or near the downtown campus with a “long gun,” either a rifle or a shotgun. But in a second news conference shortly after 2 p.m., police said it is possible those witnesses may have seen law enforcement personnel responding to the report.

Police were centering their search around the university's Old Campus. Students and faculty remained locked in their rooms or offices, complicating the search for law enforcement officials, Hartman said.

Police said they received the anonymous call from a phone booth in the 300 block of Columbus Avenue, reports CBS affiliate WFSB. Yale police, New Haven police and state police are on the scene, "actively searching for any gunman," the university reported on its website. At 10:20 a.m., the Yale emergency alert system sent out phone calls and text messages, reports the Yale Daily News.

University officials were advising those on campus to shelter in place and telling others not to come to the campus.