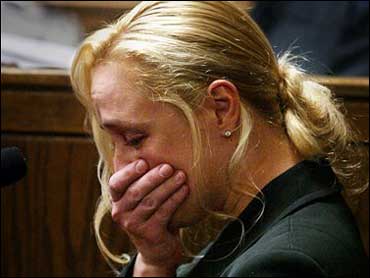 Mindy McCready apparently attempted suicide, and a man charged last spring with trying to kill her was with the country singer when police found her unconscious in a Florida hotel lobby, authorities said Tuesday.

William McKnight, 39, had been charged with attempted criminal homicide and aggravated burglary in an attack on the 28-year-old entertainer earlier this year. The couple had broken up about two weeks before the attack, which occurred at McCready's Nashville home.

McKnight, who described himself as McCready's fiance, told authorities at the Holiday Inn Harborside in Indian Rocks Beach that she had taken a large amount of two substances and drank a lot of alcohol, according to a Pinellas County Sheriff's Department report.

Bordner also refused to release McCready's condition or the hospital where she was taken. He said only that she was "recovering at a local hospital."

According to the report, McKnight told authorities that he "had been having some relationship problems" with McCready and gave them a four-page suicide note he said she had written.

McCready had testified in May that McKnight punched her in the face and choked her after he said she wasn't going to make a fool out of him by seeing other men. He posted $130,000 bail last month.

A few days before the attack, McCready — who had a hit in 1996 with "Guys Do It All the Time" — was arrested and charged with driving under the influence and driving on a suspended license.

Last year, she pleaded guilty to fraudulently obtaining the painkiller OxyContin at a suburban Nashville pharmacy and was fined $4,000, sentenced to three years of supervised probation and ordered to perform 200 hours of community service.