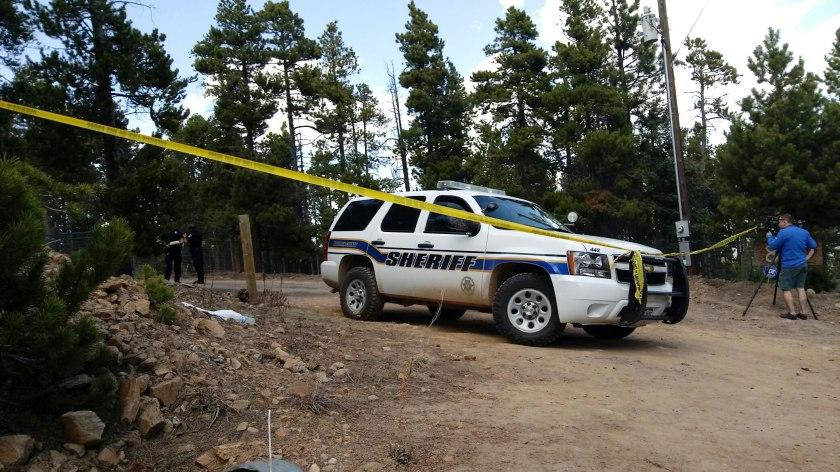 BOULDER, Colo. -- A home in the foothills northwest of Denver where three people were found slain was specifically targeted, investigators said Sunday.

Deputies conducting a welfare check at the request of a worried acquaintance found two men and a woman dead in the house Saturday, and investigators quickly ruled out murder-suicide as a possibility.

Cmdr. Mike Wagner with the Boulder County Sheriff’s Office said someone targeted the home and there is no general threat to the public. No information about a suspect or a possible motive has been released.

On Sunday evening, the Boulder County Coroner’s Office identified the three people found slain as Wallace White, 54, his wife Kelly Sloat-White, 56, both of Golden; and Emory Fraker, 39, of Broomfield, Colorado.

Family members told CBS Denver that Fraker and White were half-brothers. Fraker was taking care of the couple due to some health issues.

A friend said that the murdered married couple were the owners of a garage door installation and repair company based in Broomfield, Colorado.

The home southwest of Boulder is set about 100 feet back from the road in a remote and wooded area. No immediate neighboring homes are within view.

Deputies initially found two bodies inside the home and backed out so they could secure a search warrant, The Boulder Daily Camera reported. The investigation also was slowed because investigators found evidence of drugs in the house and called for a hazardous materials team to respond.

Neighbor Todd Kreutzian told the newspaper he did not know the people in the house well, but they were pleasant during the few times he interacted with them.

“They were nice and very friendly,” he said. “There was certainly nothing about them that was more odd, strange or threatening than anyone else around here. They were riding their side-by-side ATV and walking their dogs.”

The Boulder County Sheriff’s Office asks that anyone with information contact their tipline at (303) 441-3674. Anyone who would like to provide information but remain anonymous may contact Northern Colorado Crime Stoppers at 800-222-TIPS (8477) and may be eligible for a reward up to $1,000.