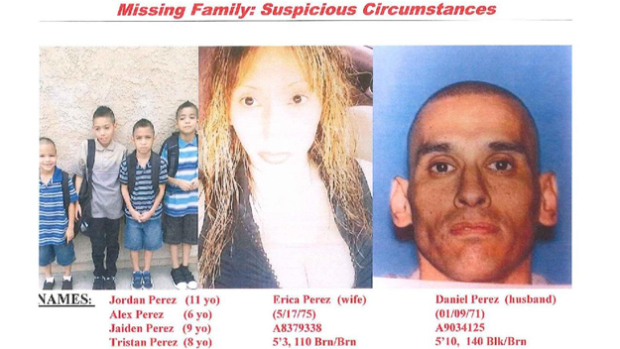 MONTEBELLO, Calif. - Authorities are asking for the public's help in locating a Southern California family of six who they say disappeared under suspicious circumstances.

Erica Perez, 39, her husband Daniel Perez, 43, and their four sons - Jordan, 11, Jaiden, 9, Tristan, 8, and Alex, 6, were reported missing from their home in Montebello, just outside of Los Angeles, on Tuesday, Dec. 9, police say, according to CBS Los Angeles. They reportedly have not been seen since Friday.

Authorities say neither parent is answering the phone or returning messages and Daniel Perez hasn't shown up for work.

Family members have told detectives that the parents' marriage is unstable and the couple has a history of domestic violence.

The family's car is a 2010 black, 4-door Honda Accord with tinted windows and a California license plate #7FKV020.

Anyone with information about the whereabouts of the Perez family is asked to call Montebello Police at (323) 887-1313.