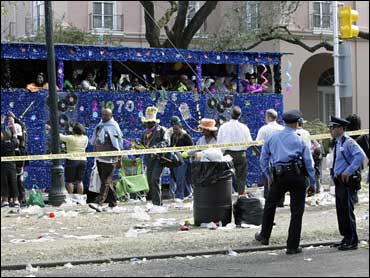 An infant and at least five other people were shot Tuesday along a parade route packed with Mardi Gras revelers, police said. Two suspects were in custody and the victims were recovering.

The shootings happened near the Garden District about 1:40 p.m. after the last major parade of the celebration, Rex, had ended. Hundreds of truck floats that follow the parade were passing when gunfire broke out.

"It sounded like a string of fireworks, so I knew it was more than one shooter," said Toni Labat, 29, a window company manager. She was with her two children, a 2-year-old boy and a 10-year-old girl.

"Everybody was petrified. They hit the ground, the floats stopped, everybody on the floats ducked," Labat said.

Labat said one man dragged himself on the ground screaming for help after being wounded and another man was gasping for air and bleeding from his mouth.

Police spokesman Bob Young said the victims were taken to local hospitals. The infant was grazed by a bullet and not seriously hurt, Young said.

Dr. Jim Parry, 41, a surgeon who was with a gathering of doctors near the shooting site, ran over to tend to one man who he said had been shot in the abdomen. "He kept asking me, 'Was I shot? Was I shot?"'

Paramedics arrived and took over for the Air Force reservist.

"I'm off to Afghanistan this summer. Damn, this is more dangerous than Afghanistan," Parry said.

Two male suspects, ages 18 and 20, were in custody and three weapons believed used in the shooting had been recovered, Young said.

The violence along the oak-lined Uptown streetcar line marred what had been a generally peaceful day of revelry in which hundreds of thousands of people partied in the streets on the final day of Carnival. Another shooting was reported on Friday night after an argument, but otherwise, the event was generally problem-free.

Beau Beals, 45, said he was outside a house party on St. Charles Avenue when the shooting erupted. He said he and other revelers tossed children over a metal fence to get them to safety, but others kept waiting for beads and other trinkets being tossed from the floats as if nothing had happened.

"They had an ambulance out here picking the guy up off the street and people didn't stop vying for throws," Beals said.