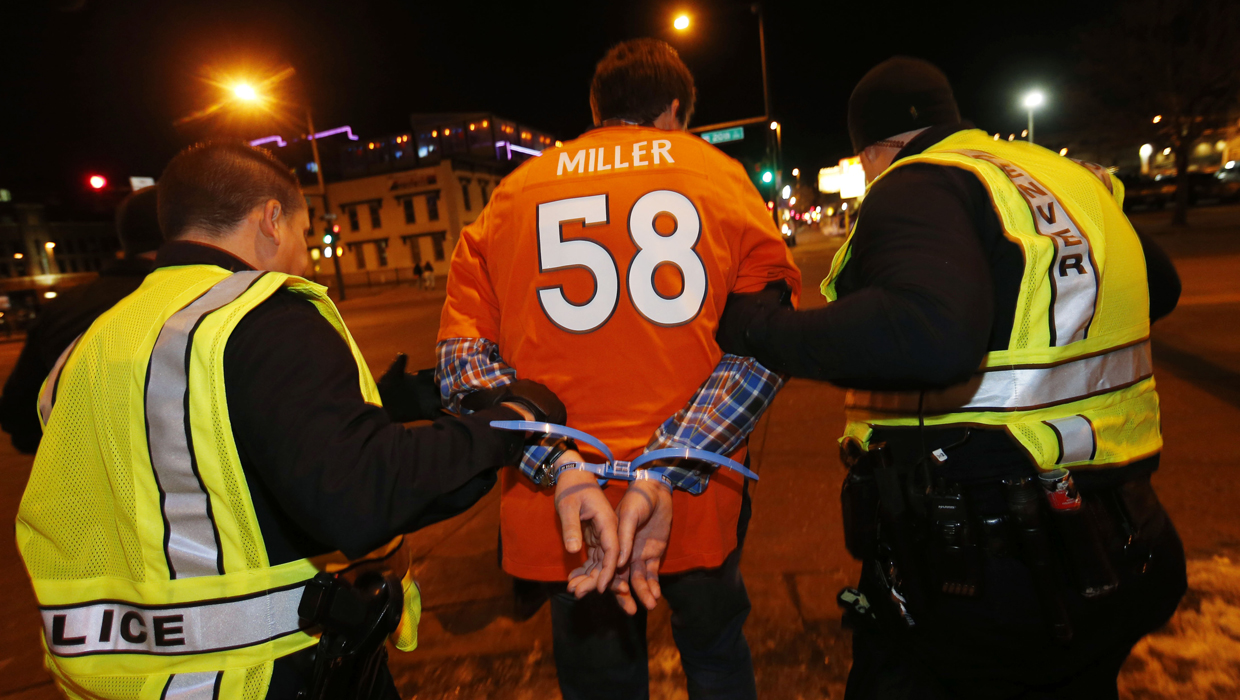 DENVER -- Thousands of Broncos fans celebrated Denver's Super Bowl victory over the Carolina Panthers in downtown streets and amateur fireworks lit up the sky around town. Police reported some arrests but no major damage or injuries.

"I've been a Broncos fan for 45 years. Way to go! What a run off for (Peyton) Manning for his last rodeo," longtime supporter Susan Tomlinson said.

The crowd became unruly at times, but police for the most part watched the Sunday night celebration from the sidewalk.

At one point, several dozen officers formed a united front near the 16th Street pedestrian mall to disperse a crowd trying to make its way down the street.

"The situation started out calm but two hours into the celebration as families moved off, it escalated," Tyrone Campbell, a spokesperson for the Denver Police Department, wrote in an email to CBS News. "Missiles were thrown, police cars were damaged."

The Denver Post reports police used pepper spray on some people, and a window on a police cruiser was shattered in an area where people tossed trash cans in the street. 12 people were arrested, police reported via Twitter on Monday -- fewer than after the Broncos' last Super Bowl wins in 1998 and 1999.

"Thank you to the thousands who peacefully celebrated #SB50 this evening. We made only 12 arrests, with no major injuries reported," Denver Police wrote in the tweet.

This year, police shut down some downtown streets and exit ramps from Interstate 25 to help manage the crowd. They also launched a campaign before the game with the hashtag #Don'tBeADonkey encouraging fans to celebrate responsibly.

Fans will get another chance to celebrate Tuesday with a free concert downtown featuring Big Head Todd and the Monsters followed by a parade.