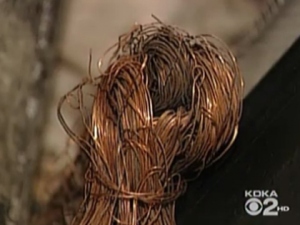 (CBS/AP/KDKA) ELLWOOD CITY, Pa. - If something silver is suitable for a traditional 25th wedding anniversary gift, and gold is good for the 50th...then what's copper?

Police say a western Pennsylvania couple cut down copper wire from 18 utility poles - because they needed money to pay for their own wedding.

24-year-old April Cater and 23-year-old Joseph Russell, both of North Sewickley Township, face a preliminary hearing next month on theft and other charges for allegedly cutting down the wire on Aug. 9, four days before their wedding.

Police say Russell told them he had lost his job at an auto parts store and needed the money. Police say the couple sold the wire to a salvage company the day after they allegedly stole it.

PennPower officials tell the Beaver County Times it will cost nearly $400 to repair each pole.