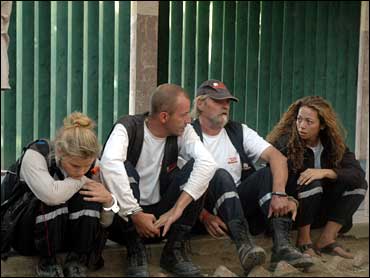 The six arrived at the Le Bourget airport, north of Paris, around 9 p.m. said a judicial official, speaking on condition of anonymity because of the sensitive nature of the situation.

The six, from the charity group Zoe's Ark, were sentenced by a court in the Chadian capital, N'Djamena, on Wednesday and were transferred to France under a 1976 judicial accord between the two countries that allows for convicts' repatriations.

Because France does not have forced labor, it is likely the French justice system will commute or reduce their sentences. But under the judicial accord, Chadian officials must agree to the terms of any sentencing changes.

A public prosecutor from the neighboring city of Bobigny was present at the airport when the aid worker's plane touched down. The six were expected to be taken to a jail in the area to await a decision about their sentences.

Family members waited outside the airport in hopes of catching a glimpse of their loved ones.

Christine Peligat said she had not seen her husband, Zoe's Ark member Alain Peligat, at the airport. She said she thought she would have to wait until Saturday to visit him in jail.

"It's been three months since we've seen one another; we can wait another night," she told The Associated Press in a telephone interview.

She said she was worried about her husband's health and called on officials to order a thorough medical examination of the aid workers.

Their transfer sparked protests in Chad, a former French colony in central Africa, with many Chadians decrying what they saw as special treatment for Europeans. In November, French President Nicolas Sarkozy went to Chad to bring home three French journalists and four Spanish flight crew members initially charged in the case.

The journalists and flight crew were arrested along with the aid group members after Chadian authorities stopped the group's convoy in October. They were heading with the children to an airport, where they planned to take off for France.

The group's members insisted they were driven by compassion to help orphans in Sudan's conflict-wracked Darfur region, which borders Chad. But investigations showed most of the children had at least one parent or close adult relative.

"They tricked us by telling us our children would be taught here," Nassour Gardia told the court. "And then they herded them like cattle to sell in France."

The case has embarrassed France. It came as the country was pushing for a European Union force to be sent to Chad to protect refugees fleeing violence in Darfur.

The deployment of the approximate 4,300-member force, drawn largely from France, already has been delayed because of lack of necessary equipment. Last month, in an apparent warning to the EU force, a Chadian rebel group declared a "state of war" against French and other foreign armies on Chadian territory.

France's Defense Ministry announced in a statement Friday that Defense Minister Herve Morin will travel to Chad on Sunday and then to neighboring Central African Republic to visit French troops there. The European Union force will also top Morin's agenda during the three-day trip, Defense Ministry officials said.

The Zoe's Ark scandal has had repercussions for other humanitarian workers, who say their already difficult job along Darfur's border has been complicated by the suspicion some Chadians now have toward all foreigners offering help.

Days after the aid workers were arrested, the Republic of Congo announced it was suspending all international adoptions because of the events in Chad.