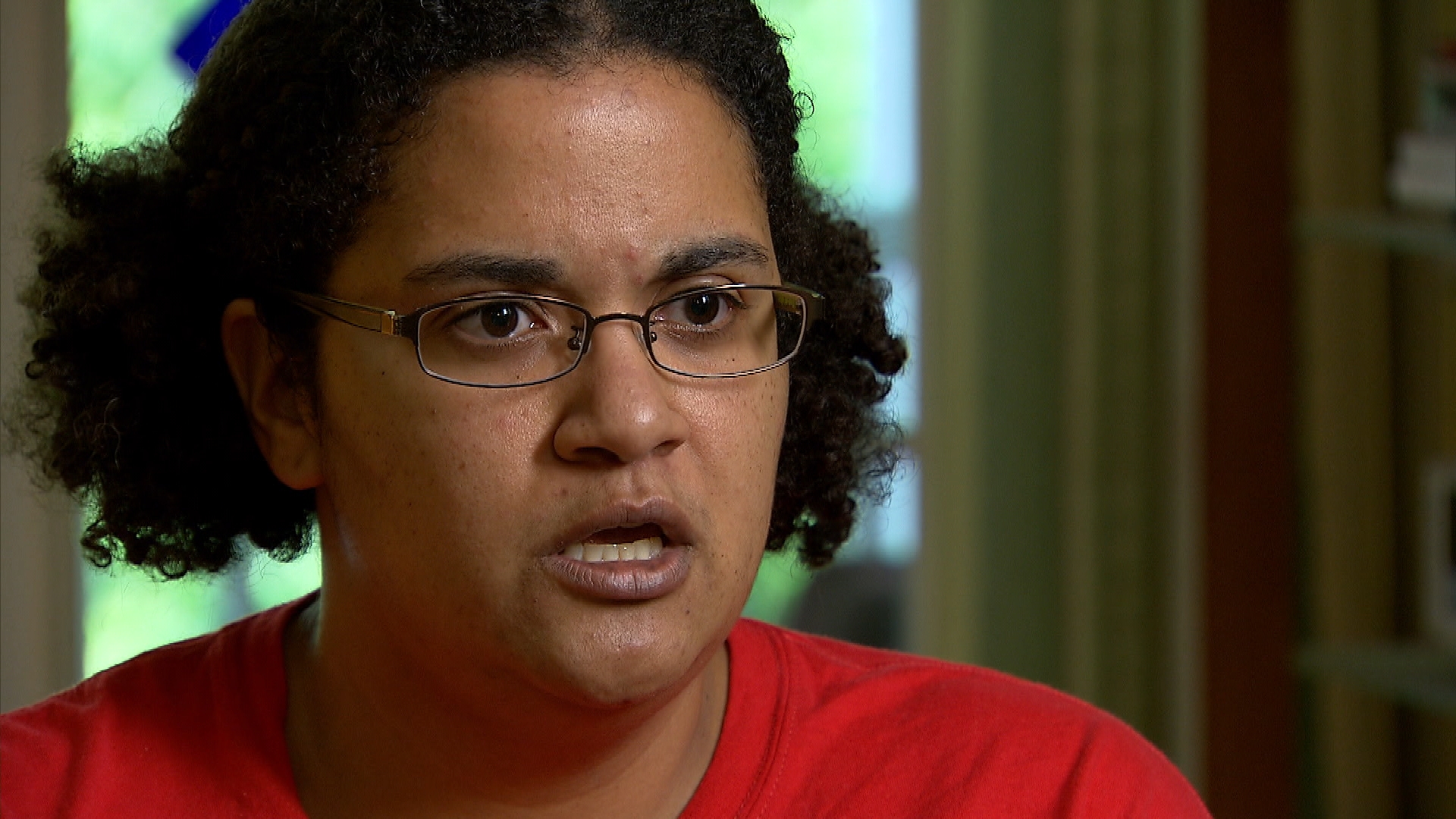 Jennifer Msumba is on the autism spectrum. For seven years, she was treated at the Judge Rotenberg Center in Canton, Massachusetts, where she received painful electric shocks aimed at modifying her behavior. She describes being strapped, spread-eagle to a restraint board and shocked multiple times before she left the center in 2009.

"It's so scary. I would ask God to make my heart stop because I didn't want to live when that was happening to me. I just wanted to die and make it stop," she told CBS News correspondent Anna Werner in an interview at her mother's home outside Boston. "I thought, they won't be able to hurt me anymore."

Msumba provided testimony to a U.S. Food and Drug Administration panel in April. The panel met to discuss a ban on using electrical stimulation devices to modify aggressive or self-injurious behavior in people with severe emotional problems and developmental disorders such as autism at the Judge Rotenberg Center, or JRC, the only known facility in the country that uses them.

JRC says it takes patients with "extraordinary behavior disorders," many of whom have been expelled from or refused admission to other treatment centers. The shock devices are used as an "aversion therapy" technique at the center in Massachusetts that serves children and adults with serious special needs. The premise is, if a student is repeatedly shocked for bad or destructive behaviors, those behaviors will stop.

In its current patient population, JRC says 29% of its 234 students are court-approved to receive shocks from a device called a "Graduated Electronic Decelerator," or GED. The shock devices are made on site.

Students such as Msumba wear a backpack or fanny-pack device, sometimes 24 hours a day. Inside is a device attached to electrodes that deliver a shock whenever a staffer presses a button on a remote control carried on their belt. JRC claims it stops bad or aggressive behavior. JRC states the goal is to manage behaviors without medications, so patients can be educated and spend time with family and friends.

"I felt like I was being punished for being born," Msumba said. "Because I was disabled I was being punished." Part of Msumba's treatment plan was for staffers to draw up a list of prohibited behaviors, ranging from head-banging to hand movements, for which she could be shocked.

"It's not humane, you don't even feel like a person, you have wires all over your body," said Msumba. "I would get five or ten shocks for just doing one thing."

Asked what that was like, Msumba responded, "Being underground in Hell."

JRC's use of shock devices came under scrutiny in 2012, when a videotape of the process was presented in a court case. It shows student Andre McCollins tied by the arms and legs to a restraint board. Records, depositions, and videotapes obtained by CBS News confirm he was shocked more than 30 times over a seven-hour period.

His mother, Cheryl McCollins, says Andre was shocked for not taking off his coat, and then repeatedly shocked for tensing his muscles, and for screaming during the shocks, which JRC calls "applications."

"When my son was screaming for help, they didn't flinch," McCollins said. "Children are being abused, tortured and controlled."

JRC says it no longer uses the restraint board in combination with shocks.

But McCollins says her son has not recovered. CBS News met Andre in June at his Brooklyn home. Previously diagnosed with autism and pervasive developmental disorder, his mother says while Andre is verbal, and knows what happened to him at JRC, it's too upsetting for him to talk about it. Cheryl McCollins claims Andre suffered permanent damage as a result of the shocks.

"It doesn't work," she says. "Shock him out of autism? Inflicting pain, it's like you're making the injury worse." She shakes her head. "You can't make sense out of insanity."

But Roger and Sharon Wood insist they were living another kind of insanity: their son, Joshua, who has severe autism, threatened to hurt them, and himself.

"He would just go into severe rages that he could not control. He would grab his head and cry. My daughter, ourselves, we would hide, lock ourselves in the bedroom and just hope that Josh wouldn't hurt himself, " his mother said.

Both Sharon and her husband Roger joined dozens of other parents who assembled at JRC the day CBS News visited the center. They felt a strong need to speak out in favor of the shock treatment Joshua receives at JRC.

"JRC was the only place that said we will take him, we will embrace him, and we will take him off of those drugs that are affecting him physically, mentally and emotionally," Sharon Wood told Werner. She said Joshua is now able to swim, ride horses, and go to speech therapy, and people are no longer afraid of him.

Roger Wood sees the shocks as a tough, but necessary choice. "For me, there's just no contest: the difference between being restrained for hours and hours a day, being helpless, being medicated, not living a life -- to having something that interrupts your behavior, redirects you, allows you to focus again on learning and activities," he said.

"We've seen him like right after and he's been totally fine," explains Sharon Wood. "There's no lingering results because we would obviously be concerned about that but we just see him being happy and go-lucky and not in any distress."

"Without the treatment program at JRC, these children and adults would be condemned to lives of pain by self-inflicted mutilation, psychotropic drugs, isolation, restraint and institutionalization -- or even death," JRC said in an earlier statement. JRC's executive director, Glenda Crookes, told Werner the shocks are painful, but students don't fear the shocks. "When you put that device on them, they're not hurting themselves anymore, they're not hurting other people anymore, and their affect, it just changes," said Crookes. In hundreds of pages of supplemental information provided to the FDA docket, JRC says it is not aware of, nor has has experience of, any patient who has sustained an injury from the GED.

But former JRC employee Gregory Miller, who submitted testimony to the FDA, disputes that. Miller told the FDA panel students often sustained burns so severe from the GED devices they were placed on "GED vacation."

Miller cites photos from the Massachusetts Disabled Persons Protection Commission (DPPC) and Cheryl McCollins. It is alleged they show severe burns Andre suffered as a result of the shocks. Miller says it took McCollins weeks in the hospital to heal.

Documents filed with the FDA show the United Nations has said use of electro-shock devices by the Rotenberg Center constitutes a violation of the UN Convention Against Torture, and would not be legal if used even against convicted terrorists.

Mike Flammia, the attorney for the Judge Rotenberg Center, bristles at the characterization of the treatment as torture. "You can never call any treatment torture if it's providing a benefit," he said. "And we have mountains of evidence that it in fact does benefit these people."

Flammia has successfully argued cases in court for students to receive shocks. He says every use of the shock device has to be approved by a court. "Independent psychologists come in here from the state and evaluate every case, and they write reports. All those reports say that the treatment has worked beautifully and should continue."

Flammia fears for parents who petitioned the FDA to keep up the shock program. "There is no other treatment for the people here that suffer from these severe behavior disorders. I can't imagine that the U.S. government is going to take away the only treatment that works."

"The procedures used at The Judge Rotenberg Center fly in the face of everything we know about the science of behavior modification," says Nancy Weiss, Director of the National Leadership Consortium on Developmental Disabilities at the University of Delaware.

Weiss also disputes JRC's claim shocks are only used for students with self-mutilating or life threatening behaviors. Weiss says documents show children are shocked for behaviors such as refusing to follow directions, getting out of their seat, or simply slouching. "You don't need to be an expert to know that what they do to people at the Judge Rotenberg Center is wrong," says Weiss. "If parents did anything close to this to their own child they'd be arrested on the spot."

"What sets Jennifer's case apart from the countless other students that have endured shock therapy, is that Jennifer is verbal," says Novotny. "She has the ability to explain the true impact of shock therapy. She has the ability to be a voice for all the other children who cannot speak for themselves. With Jennifer's case, it is now our goal to end this inhumane practice for good."

Said Msumba, "Just because someone can't speak or someone's disabled, doesn't mean they don't have feelings, they're not afraid."

In response to the Msumba case, the Judge Rotenberg Educational Center said in a statement to CBS News, "Jen did very well on the GED; she was receiving treatment for self-abusive behavior such as severe head banging. All treatments at other placements had failed." JRC says Msumba also sent positive emails to the school after leaving in 2009. When asked about the emails, Msumba told CBS News it took her two years to process her experience and recover from what she calls "abuse".

Msumba claims she endured a form of brainwashing, and says it took her two years to process her experience and recover from what she calls abuse.

Msumba, meantime, now lives at a group home in Florida, where her therapy includes playing the piano and positive feedback reinforcement -- but no electric shocks. In an on-the-record conversation with CBS News, the neuropsychologist treating Msumba says she is doing well with this treatment. The doctor says she hopes Msumba will soon be moving into her own apartment and enjoying independent living.

At the heart of the debate is not only the question of is shock humane, but what proof exists that it actually works? JRC provided CBS News with literature showing efficacy; read the JRC documents here.

Mental health professionals dispute that claim. Dr. Gregory Fritz, President-Elect of the American Academy of Child and Adolescent Psychiatry, said there's virtually no reliable data this type of aversive shock therapy is effective in bringing about a change in behavior, over the short or long term, once the shock is withdrawn.

In government documents, it's noted a majority of the FDA advisory panel that evaluated banning shock devices used at JRC felt there's inadequate evidence it works. A majority also felt using the electrical stimulus presented a "substantial and unreasonable risk" of illness or injury.

The FDA advisory panel's recommendations will be considered by the full FDA; a decision on whether to ban the use of shock devices at the Judge Rotenberg Center is expected at any time.