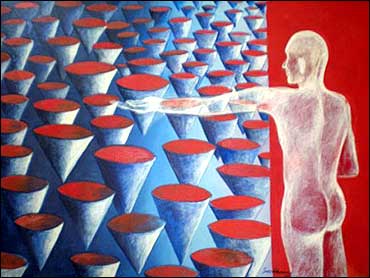 Contemporary artist Tyeb Mehta's painting, "Mahishasura" was sold at a Christie's auction for about $1.6 million. Prices for works by his contemporaries, including M.F. Hussain and S.H. Raza, are not far behind.

This rapid increase in prices began just two years ago. "In 2003 we aimed at crossing a threshold of $100,000," says Minal Vazirani of Saffronart, the largest source of contemporary Indian art. "Just two years later, in 2005, Indian art was going for anything between $500,000 to $1.5 million."

A global interest in India has brought similar interest to its art and artists. Amit Judge, the founder of Bodhi Art, best describes Indian art as being "spiritual and enduring," and says that he has great confidence that Western audiences will embrace it.

Indian art can be found on display at almost every leading art museum and gallery around the world. F.N. Souza and Amrita Shergill have works on display in the Tate Modern in London, and works by Tyeb Mehta can be seen in the Museum of Fine Art in Boston.

2A significant increase in the spending power of Indians is driving up the prices and demand for Indian art, Vazirani says. "Earlier on, it was just the wealthy businessmen and princely families that bought art," he says. "Through the mid-90s, younger entrepreneurs and professionals entered the market, which fundamentally changed the way art is bought."

Saffronart has pioneered the concept of buying Indian art online and has brought standardization in prices to the market. Vazirani says, "By going online, we published prices for Indian art for the first time establishing transparency in the market," he adds.

For those looking to buy Indian art, collector and proud owner of Mehta's "Mahishasura," Rajiv Chaudhry has some tips: