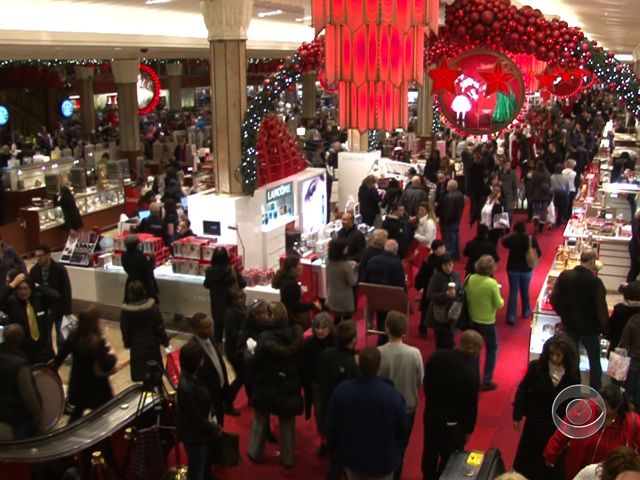 There is something encouraging about the economy Thursday. The number of Americans filing for unemployment dropped to 364,000 last week -- the fewest since April of 2008 -- and consumer confidence is on the rise. CBS News correspondent Anthony Mason has been looking into all this.

The mood at the mall is brightening.

This past Saturday, shoppers spent $26 billion -- a record for the last full Saturday before Christmas.

"I'm spending more on others and more on myself," said consumer Bobby Duffield. Shoppers like him are confirming what surveys show: that consumers are feeling better about the economy.

Employers are more confident too. Steve Tiffen, whose Long Island company makes filters for camera lenses, said: "I feel the U.S. economy is getting better."

"But are you hiring?" Mason asked him.

"We have taken an approach to increase our temporary staff," he said.

Tiffin has added 20 temporary workers this year -- a 10 percent increase. But he wants the situation in Europe and Washington to stabilize.

Weekly first-time unemployment claims have been falling steadily for the last month and are now well below 400,000.

"It looks like we're past the threat of another recession?" Mason asked economist Ellen Zentner, who predicts the economy will grow 2.3 percent next year.

"In terms of bringing down the unemployment rate, is that enough?"

"The economy really needs to get well beyond a 2.5 percent growth rate -- closer to 3, 3.5 percent in order to bring the unemployment rate down meaningfully," she said. "It's not really growth you can excited about, but it's better."

Better, but not good enough. That's why Zentner expects the unemployment rate will remain around 8.5 percent through next year.