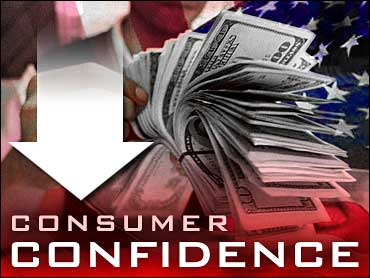 Americans became less optimistic about the economy in February, sending a widely followed barometer of consumer sentiment below analysts' estimates.

The Conference Board, a New York-based private research group, said Tuesday its consumer confidence index fell to 101.7, down from a revised 106.8 in January, stalling a rebound that began in November following the Gulf Coast hurricanes. Analysts had expected a reading of 104.0 in February.

In a statement, Lynn Franco, director of The Conference Board Consumer Research Center, said "consumers are growing increasingly concerned about the short-term health of the economy and, in turn, about job prospects." But consumers' assessment of present conditions is holding steady at a four-and-a-half year high, suggesting that the start of 2006 will be better than the end of 2005, Franco said.

The component of the consumer confidence index that assesses consumers' views of current economic conditions rose to 129.3 from 128.8. But another component that measures consumers' outlook over the next six months, the Expectations Index, fell to 83.3 from 92.1 in January.

Excluding the two months following Hurricane Katrina, the Expectations Index in February was at its lowest level since March 2003, when it was 61.4.

The downbeat report cast a cloud over spring retail sales and tempered the outlook for the economy. Economists closely track consumer confidence because consumer spending accounts for two-thirds of all U.S. economic activity. Still, the report wasn't seen as alarming since it covers just one month.

The results, however, come at an uncertain time for the U.S. economy. Job growth has been solid, but consumers face higher energy costs amid tensions in the Middle East. Moreover, at least two more interest rate hikes could be in the offing this year in an effort to combat inflation.

Nevertheless, consumer spending has held up, though many analysts expect the pace to slow down amid a cooling housing market, rising energy costs and higher interest rates. The nation's retailers reported better-than-expected sales in January, as shoppers armed with holiday gift cards and lured by mild weather returned to malls in search of clearance and spring merchandise.

But the arrival of frigid weather cooled sales of spring merchandise in February, resulting in what could be disappointing figures for many apparel stores. Discounters, which sell snow shovels, snow plows and other cold weather items, are expected to do better.

Some analysts caution not to read too much into Tuesday's figures. Consumer confidence historically has been a lagging indicator, according to Carl Steidtmann, chief economist at Deloitte Touche. And job growth appears to be a more important indicator of consumers' willingness to spend. But if consumer confidence continues to sour over the next few months, shoppers may be in the mood only to buy what they need and not do a lot of impulse shopping.

Consumer confidence, says Steidtmann, "gives us another data point that consumers are willing to spend."

Ken Hicks, president and chief merchandising officer at J.C. Penney Co. Inc., noted that the consumer confidence report is only one of a variety of sources the retailer uses to help plan business.

"We are cautiously optimistic about the coming year, based on our trend and our customers' early reaction to our spring merchandise," he said in a statement.

The Conference Board index is derived from responses received through Feb. 21 to a survey mailed to 5,000 households in a consumer research panel. The figures released Tuesday include responses from at least 2,500 households.